Can you hear me cheering from here? 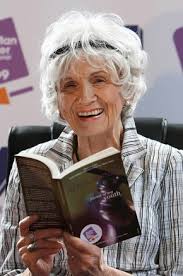 Alice Munro woke up with a phone call early this morning.
Her daughter told her, Mom, you won.
Won what?, responded the eighty-two-year-old writer, now living in Victoria, B.C.

Only the Nobel prize for literature,

only a million dollars, only the first Canadian, the thirteenth woman in a long parade of men like George Bernard Shaw, Ernest Hemingway, and T. S Eliot who have scooped the prize before.

She could be forgiven for asking instead, Won what now? Her award shelf is, after all, crowded with honours: three Governor General Literary awards, three Giller prizes, the Commonwealth Writers’ Prize, the American national Book Critics Circle Award and in 2009, the Man Booker International Prize for her lifetime body of work.

The Nobel is the big one. What it says to the world is pay attention: a master is here in Canada. She may be frail, as her long time editor Douglas Gibson has indicated. Frail be damned. This woman is fierce.

Already adored around the world for elevating ordinary people into perfectly crafted stories, Munro has said she once wished she could write novels instead to be taken more seriously as a writer. Soon enough, she abandoned that thought as her great achievements in themselves resulted in the short story form being exalted.

There is a disarming simplicity to her genius, maddening, really, for a lowly writer who attempts to parse the paragraphs as I do. Most of her stories are so rich that I put the book down and decide, right then, that I will just quit writing and be a reader forever. When I finished The Bear Came Over the Mountain (from Hateship, Friendship, Courtship, Loveship, Marriage), I was still with the weight of it, cheeks wet, unable to shake it. It was a shock to find that I cared so deeply, in so few pages, about Fiona who says I don’t think it’s anything to worry about, I’m just losing my mind, and her once philandering husband Grant,watching helplessly as she is put in a care facility, leaving him with the ghosts of his past. Is there a better story anywhere of what dementia does to a couple? Filmmaker Sarah Polley was also moved, enough to make a wondrous film based on this story, Away From Her, that somehow managed to keep Munro’s magic intact. That piercing through layers of human nature is the thread that connects all of her work.

Yet this Nobel win can be nothing if not inspiring to me, to every writer who “looks around”, especially in this country where great writing is cherished, and for women around the world to witness one of our great feminist writers reach glory. Can it be inspiring enough to bring Munro out of her recent retirement?  She has published before after threatening to stop. Writer Katrina Onstad suggests the public doesn’t want an artist like Munro to put her pen down.

Willfully exiting the creative life goes against our conception of the quixotic, sacrificing artist. It’s not just that the optics are weird – it’s hard to imagine Francis Bacon at the early bird seating or Frida Kahlo taking up golf – but it seems somehow morally wrong for an artist to turn off the faucet by choice. It’s unappreciative, almost selfish; if you’re lucky enough to get the gift, how can you squander it with such a pedestrian enterprise as retirement? An artist is supposed to be moved by the muse, forever channelling from some otherworldly plain. That production can’t stop – and won’t, if it’s authentic – until breath does. We expect our artists to go out creating, like Michelangelo, who died at 88 still making plans for St. Peter’s, or George Orwell, writing and rewriting1984 while deathly ill in northern Scotland.

Ms. Munro, it’s okay, we accept your retirement. We can bask in your spotlight and all those stories. I am going to read them again, one by one.

Can you hear me cheering from here?

Recent posts you may enjoy:

0
Your twerking is boring me
Forest secrets