24 hours with an alluring stranger and a trilogy later… 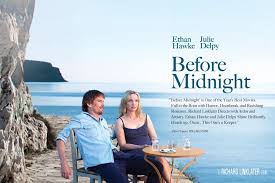 Wet and damp days are hardly the prescription for summer moods to set in but a great love affair will lend some heat anytime, anywhere.

Before Midnight finds the couple, now in their early 40s, living in Greece, almost two decades after that fateful first meeting on a train heading for Vienna. That first meeting, seen in the minimalist film, 1995’s Before Sunrise, led the couple on a 24 hour walkabout as they share intimate thoughts about life and love, all the while knowing they will never see one another again.  Celine and Jesse have lives to return to but this kiss torpedoes any certainty.

The conclusion of that film carries a promise, as the train is about to leave, of a future encounter in 6 months.

The next film, Before Sunset, picked up an Oscar nomination for its screenplay, now with the added input of the two stars, Ethan Hawke and Julie Delpy. The plot finds the couple meeting, nine years later, in a Paris bookshop where Jesse is on a stop of a book tour for his best selling novel inspired by…you guessed it, his brief time with Celine.  He is set to leave Paris shortly but once again, Celine shows up and the encounter, shot in real time in Paris, results in renewed passions and more profound observations disguised as normal conversation.

The film’s reception left a future chapter open although both director Richard Linklater and the cast remained secretive about details. When news broke that Hawke and Delpy were spotted filming in Greece, the trilogy’s many fans went bonkers and have been waiting to find out just what happened to these two. Before Midnight reveals the couple, now together, but are they happy?

In the best tradition of fictional serial,  these films succeed because they insist viewers become invested in these characters. Celine and Jesse are flawed with annoying quirks and flashes of immaturity but they are you and me and everyone we know as we bump along our unscripted lives.  Set up against the dystopian blockbusters and comic book heroes writ large, this film is in itself a little miracle worth cheering for.

0
Taste is for phonies
In the garden with Joni