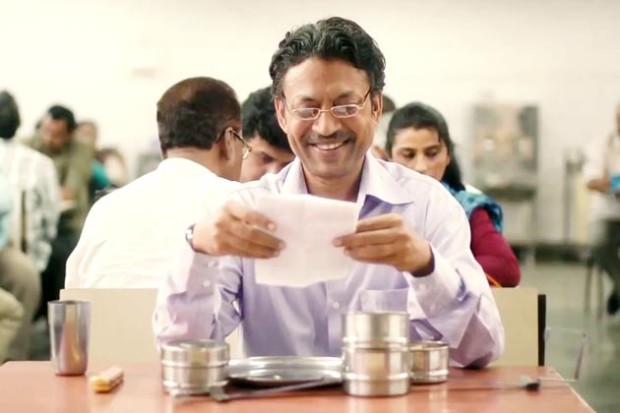 I first saw this film last September as you can read here.

Correction: I saw two thirds of this film.

The projector broke down shortly before the movie’s end.

For what seemed like forever, director Ritesh Batra kept us entertained while the TIFF tech folks went at it.

This was no easy feat as half the audience members implored Batra to tell the ending while the other half said please don’t !

He refused but brought up the film’s very charming star, Irrfan Khan, to help keep us at bay. (Eventually, another screening was scheduled and we were able to see the film as a delicious whole.) That moment at TIFF  was a good omen for a big screen debut. If the film was a bore, the audience would flee. Tight schedules are a part of the festival and no one needs to stick around for niceties. But what this first time director achieved was just enough tension to keep us enthralled with a charming tale of a very old tradition in Mumbai. Batra saw a 60 Minutes documentary on the famous “dabbawalas” who deliver over 5000 hot lunches daily from home cooks to office workers. He then conjured up a letter gone to the wrong address and the result is a love story with just the right pinch of comedy to lighten the tone. Balance is often missed by the world’s best directors. Batra got it right with his first film. I will be watching what he does next.

A note if you plan to go: Eat first, or book a table for a meal afterward at your favourite Indian restaurant. If not, don’t blame me if you chomp on your hand.

0
Canadian crack: plus one
Gloria Steinem at 80