Tiff day one: It’s only love 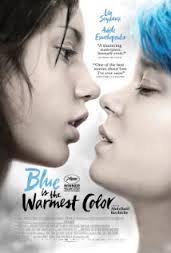 If I was hoping for a fierce opening flourish to great film making, I got it last night at TIFF, albeit with some explosive intimacy that I can’t recall seeing before on screen. Hello. I’m awake now.

Blue is the warmest colour, the English title given to Franco-Tunisian director Abdellatif Kechiche’s La Vie d’Adèle, is a three hour heady trip. But for a stiff back, I was transfixed, inside the head of the young Adele, shot throughout in extreme close range, as she comes of age and falls hard for another woman. Punctuated by dialogue that pokes around at philosophy and art, the film was a joy to behold.

Real love stories are extremely rare on the big screen. We are fed a diet of stock narratives that pass for romance but are always tidy, even when charming, chapters playing out in predictable patterns.

Real love is messy and often wildly chaotic.Why else are we”struck” and” torn” with hearts “stolen”?  Adele’s heart, revealed through the wonderfully expressive Adele Exarchopoulos, becomes our own as it is touched and broken.

Smack in the middle of this Palme D’or winner ( love those Cannes juries) comes ten minutes of raw sex: arms tumbling, mouths open, sighing, grunting, slapping, legs up, around, back, over, under, endless. The film then cuts straight to a jubilant crowd scene and we’re off in Adele’s head again as she begins to navigate an uncertain love affair. Actors Adele Exarchopoulos and Léa Seydoux bring absolute, crazy commitment to their roles and raise the film far beyond mere erotica. Steven Spielberg, the 2013 Cannes jury president, was spellbound calling it “a great love story that made all of us feel privileged to be a fly on the wall, to see this story of deep love and deep heartbreak evolve from the beginning.”

Recently, the two leads accused their director of horrible shooting conditions, claiming the infamous sex scenes took 10 days to shoot. Both suggested they would never work with him again. Julie Maroh, the author of the original graphic book on which the film was based, has complained that she found the film’s explicit images”a brutal and surgical display, exuberant and cold, of so-called lesbian sex, which turned into porn, and made me very ill at ease”. This week, everyone involved was trying to put the controversy on mute as the film opened at TIFF, Seydoux now saying she was not criticising the director, only his technique.

The fuss and hoopla over the explicit scenes is sure to boost box office but I hope an audience comes for the rest of the film which is wondrous, bold cinema. I can’t disagree with Maroh as some of the sex was brutal to me and I didn’t always want to be Spielberg’s fly. Then again, I don’t watch Olympic wrestling either. But, within the context of this volcanic love affair, it isn’t out of place. I would love to see the same fuss made over heads being blown off by the second in North American media. I never really get the fuss about sex on film. By the film’s end, I too was heart sick and overwrought.

At last night’s screening, the creative team and talent appeared all smiles and beauty on stage. When asked by an audience member, in light of anti-gay sentiment coming from Russia, if the piece would help change public opinion towards homosexuality, Exarchopoulos, sure to be this year’s break out star, was hopeful.

“That’s why we make cinema, to touch people. This subject is universal. I think it can let people open their minds. During the shoot, we were not engaged: it was not a political movie, it’s just a love story.

I really hope people will watch this movie and see, it’s only love…it’s legal.”