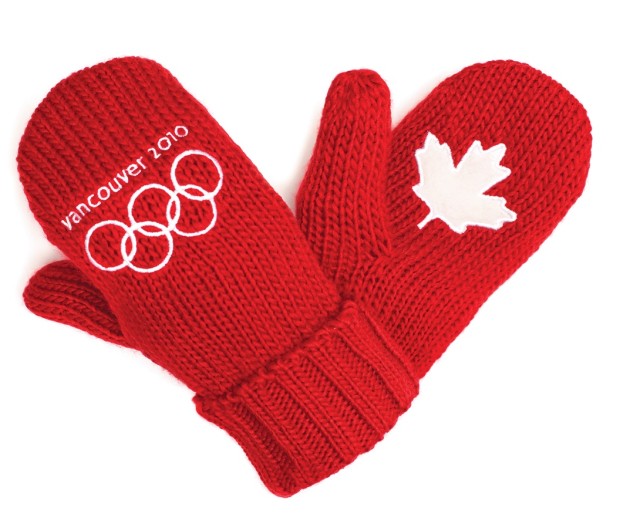 Canadians have two choices in winter.  Forget those who check out for the whole season and head to a warmer climate-sorry, you don’t count here.

We can hurl ourselves into the chill and become parkas on skis, skates, boards and cheap plastic sleds 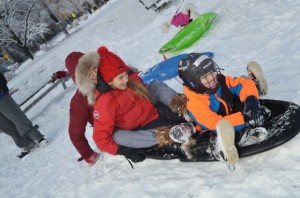 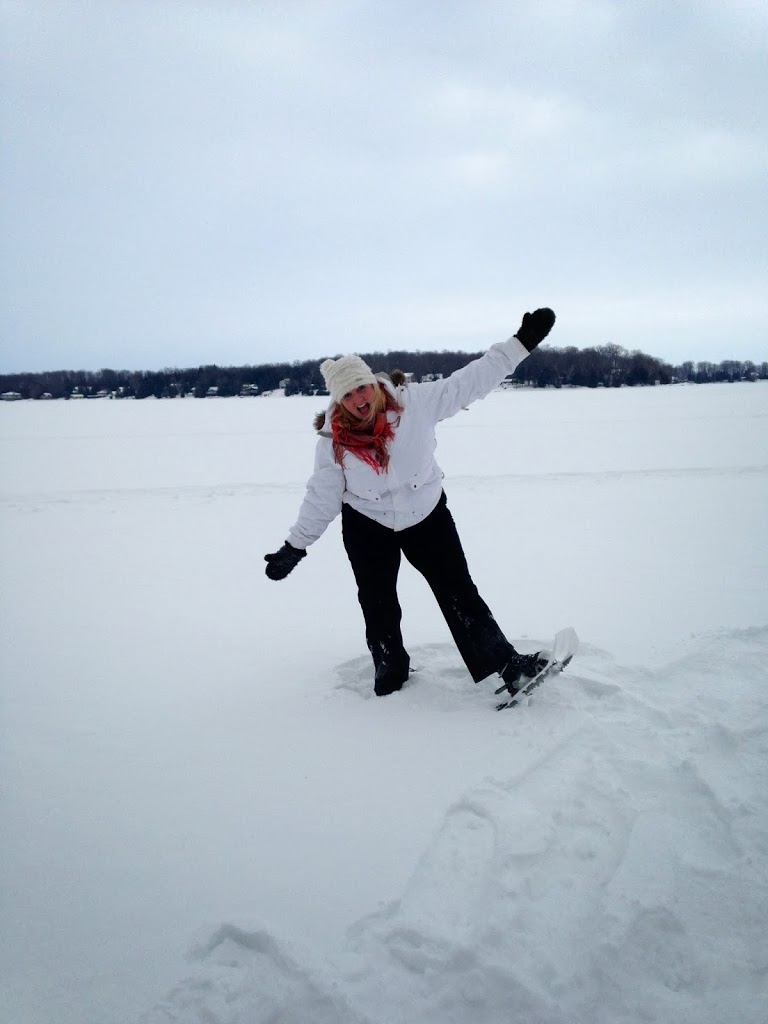 (Yes, that’s me, pretending to be an experienced snowshoer on Lake Simcoe, Ontario)

Or we can hibernate and watch others do it better, much better, in our wildest dreams better. As we hunkered down to watch, the Winter Olympics offered vicarious thrills and fascinating narratives to ponder.

There is the Own the Podium script of medal counts and endless inhumane questions to spent athletes about how they feel about losing the gold.  Winning is everything. Except when it isn’t.

There is the “big game” story, written in stone and etched over endlessly by a barrage of advertising. We all play for Canada, says Canadian Tire. We grind it out and go for the gold, says Tim Hortons. Hockey is our game, says everyone ( except Rick Mercer who is tired of that stereotype) and the thousands in this city counting down the days to the World Cup. 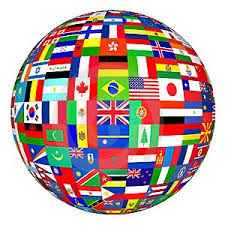 There is the fierce rivalry narrative that is hammered over and over again as we watched the Canadian women fight for a victory on ice over their American competitors.  Did we really need to hear constantly that “these two teams don’t like each other” right up until their podium moment? Who cares? Hayley Wickenheiser and her band of merry warriors offered up the best moment of the games yet and gave new rich meaning to the lesson we all know but often forget: Never. Give. Up.

Put up your hand if you wished it was their team we were watching today. I love the men’s game, I really do, but for sheer excitement and gob smacking grit, I think the women have it.
Why don’t they get the final day slot? 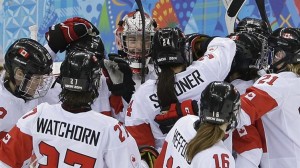 Most of us can never get near the kind of drive that lives within these Olympians. The attempts to humanize their efforts by both CBC and NBC gloss over the obvious: to be on any Olympic team may take hometown support, financial backers and the love of Mom but mostly it takes the very best focus, discipline and strength of purpose.

This is, simply put, awesome to behold.

There are heroes in everyday life but we don’t hear about them as our usual narratives of celebrity culture, wacky weather patterns and economic woe make us numb. If the ice storm and subsequent polar vortex of January didn’t dishearten, then surely the serious concern over Russia hosting the gazillion dollar games would.

But there is always something organic and glorious that emerges.

Rising above the competition is the Olympic movement itself, the “joy of effort, the educational value of good example, social responsibility and respect for universal fundamental ethical responsibilities”.
( read more about Olympic values here)

It is the best narrative, one that has competitors embrace one another on the podium; a Canadian coach assisting a Russian athlete who finds himself, mid race, in crisis; teammates who talk to each other as they race down the slope; a pair of skaters whose deep friendship was as beautiful as the patterns they curved on the ice.

It is what grips you, the armchair jock, as you find yourself standing up and cheering some athlete from some country, you’re not sure which but it’s not your own but, hell, look at that, look at her, she’s picking off one skier, then another, in some million kilometre cross country race in a country across the globe and you’re tearing up because it’s just that great to see the best instincts on show.

There is always someone to root for in the games of life.

It is hearing your national anthem played as the blazing leaf fills out the screen in front of you and you watch the many ways a champion shows joy.

It is in the grace of defeat when a young man tells reporters he did his best for his country and he’s sorry that it wasn’t good enough.

It was good enough, Patrick.  Thanks for the thrills.

1
Is Jimmy Fallon secretly Canadian?
Postscript from the streets of Toronto