Your twerking is boring me 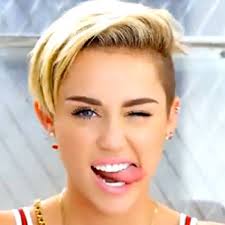 In the ring are Sinead O’Connor and Miley Cyrus. O’Connor, now lamenting the murder of music and rock ‘n roll, threatened legal action against Cyrus for mocking the Irish singer’s mental health.
O’Connor says she spoke in the spirit of mothering when she cautioned the gyrating Cyrus not to allow the music industry to make a prostitute out of her.

That was her first mistake, as anyone with teens in their midst knows only too well: I’m young, you’re old. You just don’t get it.

Of course there was a giant eye roll, or tongue roll or whatever that thing is that she does. Cyrus is mastering the art of profane before the giant eye.

Over in the stands, looking bemused, is Madonna. The singer, in an essay for this month’s Harper’s Bazaar, writes that eccentric behaviour is expected from pop stars.  If she can’t be daring in her work or the way she lives, what’s the point?

“I’m not a big fan of rules. And yet we cannot live in a world without order. But for me, there is a difference between rules and order. Rules people follow without question. Order is what happens when words and actions bring people together, not tear them apart. Yes, I like to provoke; it’s in my DNA. But nine times out of 10, there’s a reason for it.”

No artists were named. Still, Madonna suggests that daring behaviour only works if one is surrounded by the right people.

So we can only hope the Mensa crowd gets around to the likes of Cyrus. On this morning’s Today show, she told the 55-year old host Matt Lauer that this sex thing may just be a young person’s game as those over 40 aren’t sexual.

It that so, dear? Don’t forget, Dad and I will be out late tonight. Don’t wait up. And read writer Elizabeth Renzetti, looking for an alternative to the circus.

( I’d love some Respect from female pop stars, but I’d settle for pants)

Or Linda Ronstadt, also in a reflective mood with a new memoir, Simple Dreams, who brings it all home in Salon.

“Really good musicians don’t care whether you’re male or female, whether you’re a goat or a donkey or a camel. They care if you can get into the groove and get into the spirit and play really well. If you can’t play well, they don’t want you around. If you can, you’re always welcome. That’s the nice thing about music. That’s why music has always broken racial barriers and gender stereotypes. Music has always been one of the great things that conquers all.”

0
Untamed kissing
Can you hear me cheering from here?