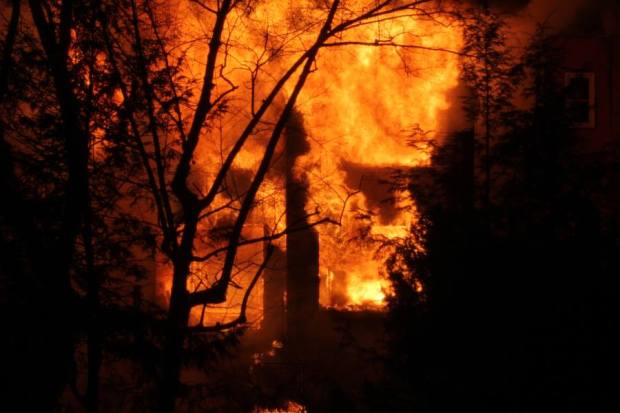 Snow saved the trees this morning. Maybe a few houses too. 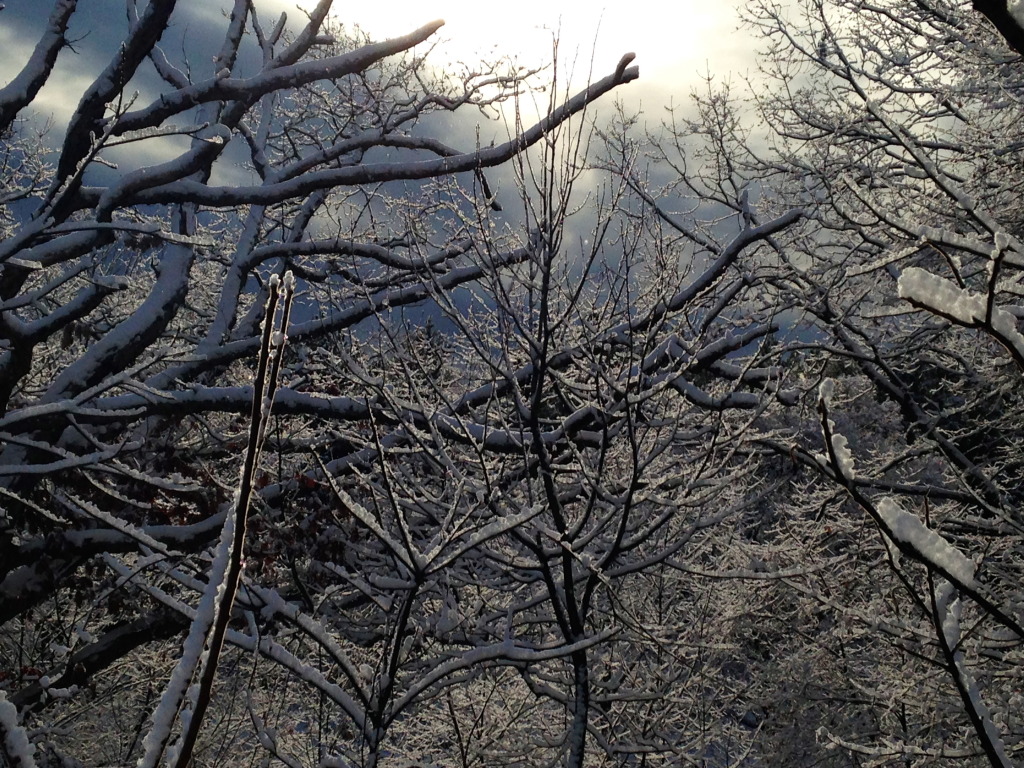 An early morning fire broke out today in a newly constructed home behind us, two doors away. Firefighters managed to quell the blaze before it spread to neighbouring homes. We are all safe. Sunshine now peeks through the empty shell remaining of what is perhaps somebody’s dream home. 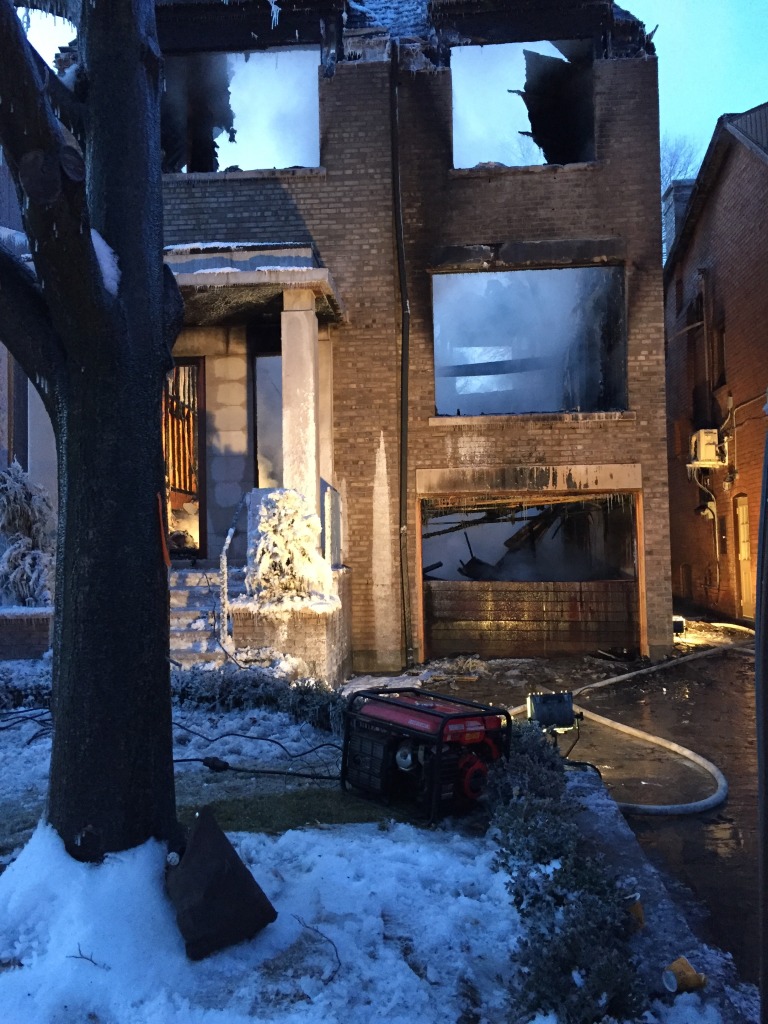 Many of the emergency crew has left the area after shutting down traffic with several trucks—I lost count after nine; news reports have eighteen at the scene.  From my perch here in my writing nook, I spy one lone firefighter high above the site, hosing it down yet. 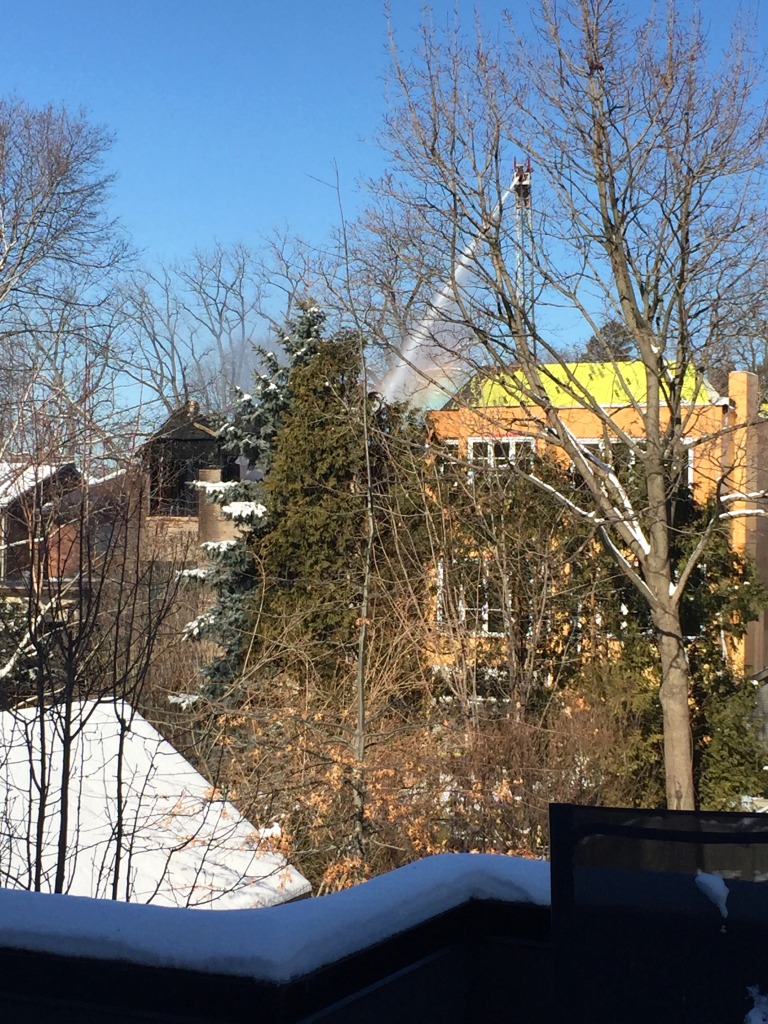 There is little danger left, or so it appears. Winter has her charms after all. Maybe I’ll get a walk in today and catch something other than embers on my path. Fatigue should have set in long ago.  I was up late (writing—what else?), and woke up, what seemed mere minutes later, by Lucy’s mad barking. We cursed a little (dogs and babies both learn to swear early). Peter looked up to see a red glow through the blinds.

We think we’ll be calm, hope to be cool, reason ruling our steps in events that demand immediate action.  From where we watched, flames licked the treetops—would our backyard be stricken next by a spray of sparks? The smoke field alone was massive.  Lucy, grateful now that her lumbering family was now fully alert, was at my heels. What will you do now?

Wake kid at home. Tell her to grab things—we could see trucks outside and crew knocking on doors.

Bring only the important stuff.

Remember the important stuff? You’re supposed to have distilled it all now after other difficult life lessons.

How fantastic to learn what we are made of: within minutes, my kid had parked photo albums on the curb outside.  From her sister’s room, still full of childhood treasures for those home visits from university life, she grabbed the two most important items to stash alongside the albums. 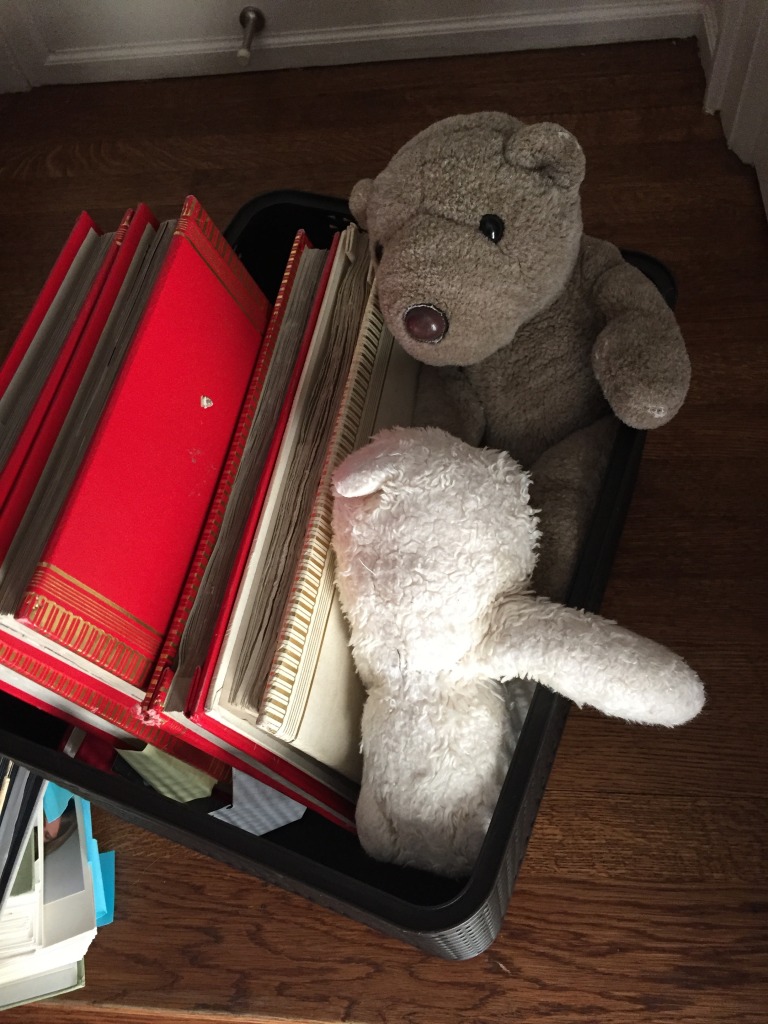 We dumped it all in the car trunk and waited it out, eyes on the dangerous orange, too close for any attempt at sleep. 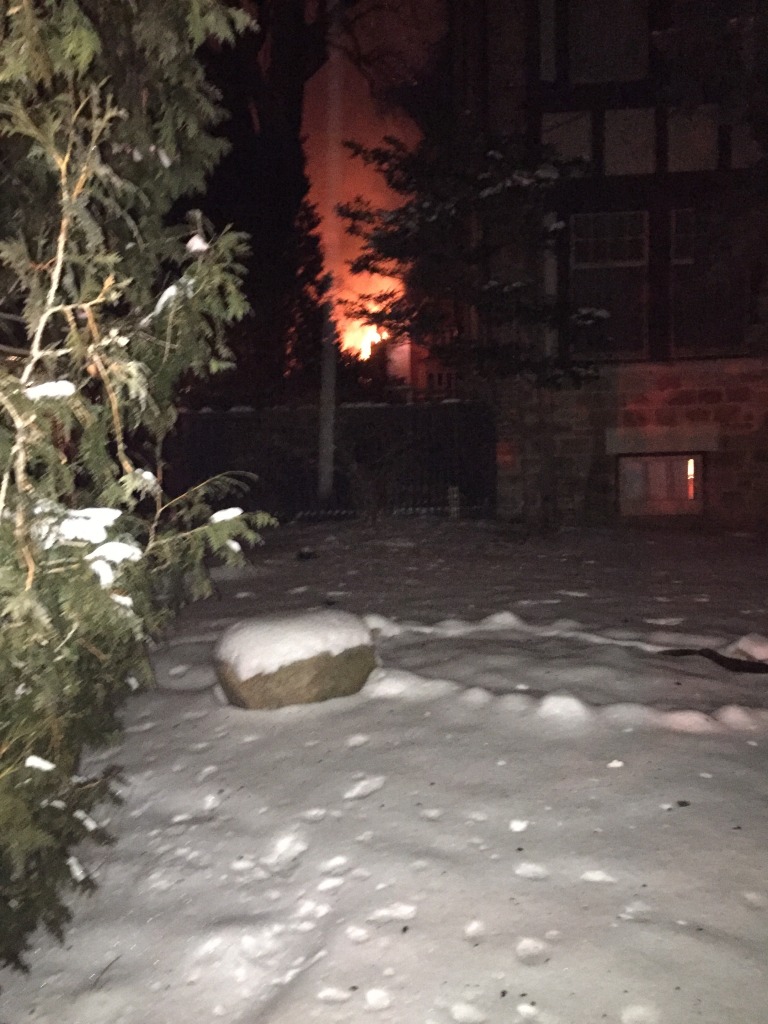 Old newsroom instincts kick in, or perhaps it was the news trucks pulling up and chopper overhead. Treacherous as it was (fire hose water turns to icy sidewalks in seconds), I managed to walk over to the scene of this immense heat. Neighbours huddled on a driveway. Nobody had much to say—words in our heads would surely spell comfort in numbers.  Firefighters were everywhere—these people are magnificent, I think, but is the fire not too much for them?  Smoke, or was it the cold creeping in to my fingers, sent me home, back to the window. The others were now asleep, as were some of my neighbours peacefully snoozing, unaware of the drama unfolding. How I wished to be one of them, instead of breathing slowly in a moment produced by Motherhood: protect the nest. 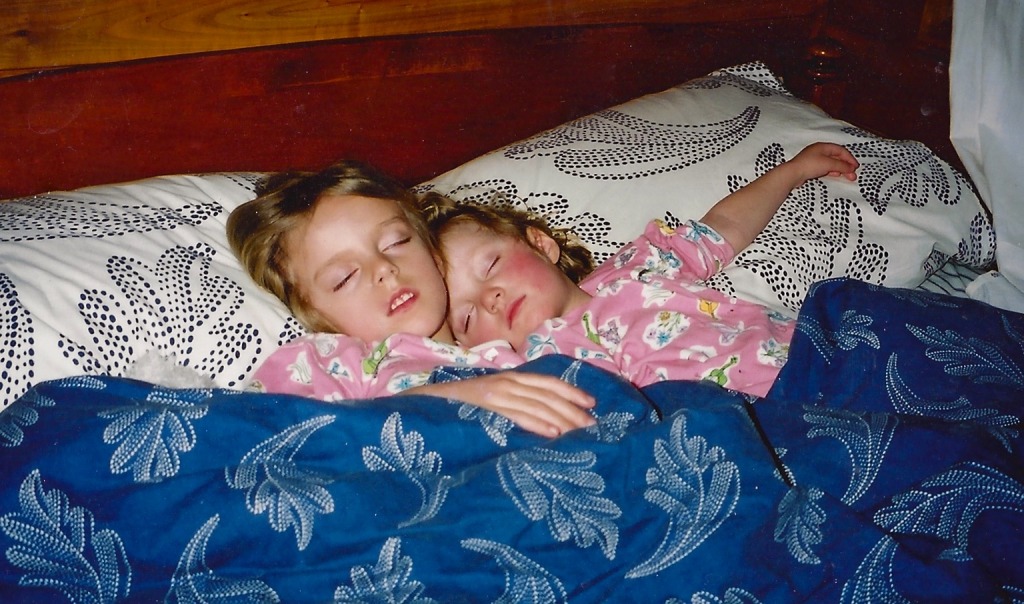 Dawn emerged, and the fire subsided, smoky clouds still greeting the morning rush hour on nearby streets. Peter went off to work and I scrambled some eggs and took a tray up to the sleepy big kid the one who remembered to pack her sister’s old teddies.  Put my coat back on and mustered up a brisk pace. By now, the street was an icy runway and still, these workers are at it-my neighbour caught some of their hard work in this recap.

In her sunny kitchen, we sipped coffee. She made a pot to serve 30 of these folks in the business of saving neighbourhoods; it was okay to sneak a wee cup of the stuff. Cups of nourishment: I love my neighbours.

I love my house.

Today, I also love the men and women of the Toronto Fire department who saved us both. There’s little I can do but feel gratitude…again.

And maybe deliver a hit of Nutella. Sugar works on cold muscles, doesn’t it? 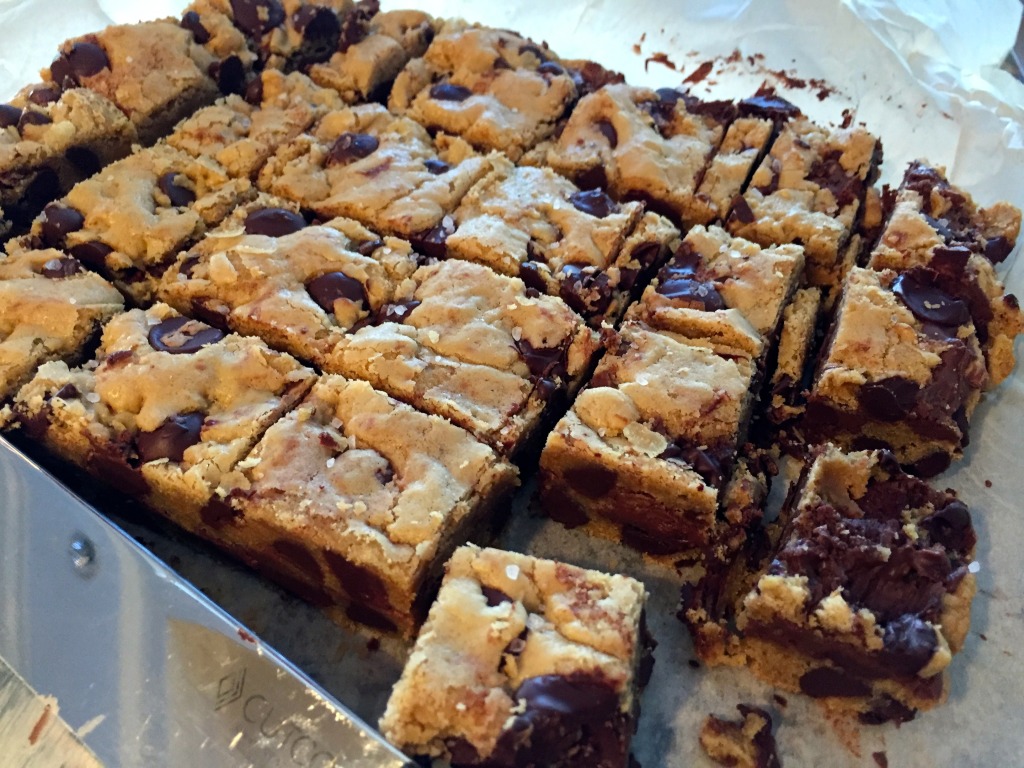 A fire plan is next. Do you have one?

My daughter remembered to cart out her prom dress too.

What is in your if I had to flee basket?