Ang Lee: Make me feel something! 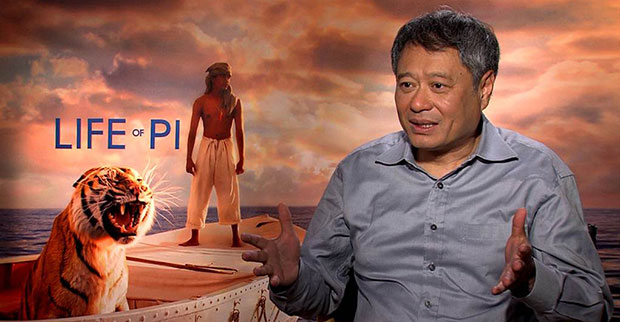 The success of a film, or other collaborative art form, depends upon an assortment of elements that produce magic. It is impossible to say one element is more important than another.

Real balance is elusive. What stood out when the lights went up?

Here is the second in a series of snapshots of Oscar nominated films: Ang Lee’s direction of Life of Pi.

Ang Lee is rich in trophies. The Taiwanese-born director has collected numerous awards for his diverse collection of cinematic gems. His latest, Life of Pi, is a stunning adaptation of Canadian Yann Martel’s novel about a teenager shipwrecked with a tiger on board his lifeboat. The 58 year old director says shooting the film was a test of faith that took four years to complete and a cast and crew of 3000.  It was easily the most beautiful film I’ve seen all year and Lee’s direction wins him my stand out for best director.

Critical acclaim may have followed Lee for most of his career but he shrugs it off. For Lee, a true barometer of success is how well his talent and crew connected emotionally to the material.  One can admire his facile hopscotch around genres but Lee’s films carry a common thread: emotional pull that lingers long after a screening ends. In the hands of a master, these pulls are subtle brushes that bear no relation to bombastic material aimed to manipulate a reaction.

Consider this quiet but devastating scene from Brokeback Mountain which scooped Lee an Oscar for best director.

Or this one from Sense and Sensibility featuring a snippet of a timeless sonnet:

For Life of Pi, Lee’s visual poetry marries with new technology. Others before him have flirted with 3D but in Lee’s hands, it elevates rather than distracts. This is not his first time working with special effects. In 2000, he wowed international audiences with the spectacular Crouching Tiger, Hidden Dragon.

For Pi, Lee turned to directing colleague James Cameron to provide the 3D technology. Cameron is quick as always to boost himself when asked about the film but can’t help being generous when asked about his fellow director.

There are nine films nominated for best picture but only five for best director. How a film gets a best picture nod without the auteur being recognized is a longstanding Academy travesty.Since they extended the best picture nominee list to include more than five,it will happen again and again.  However unjust, this year’s group of five is killer competition. Still, Lee reigns. Sentiment may favour Spielberg.  His film, Lincoln, makes Americans feel good about themselves but Mr. Lee’s work wins my vote.

Next in my series of Stand Outs: Daniel Day Lewis