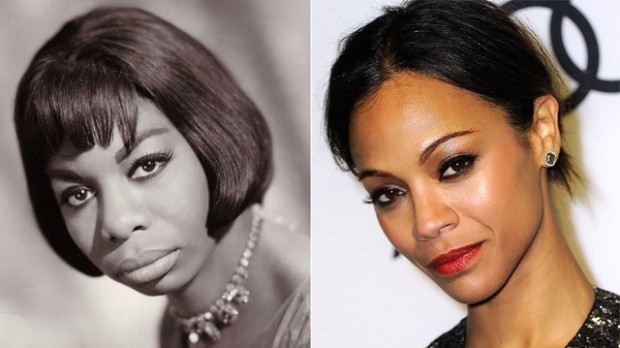 Director Cynthia Mort has stepped in it.

In casting Zoe Saldana, an Afro-Latina actor, to play singer Nina Simone, the filmmaker has caused a storm of fury from Simone’s many fans.

The outcry, now fuelled by a petition circulated on social website Change.org, began when Mary J. Blige dropped out of the bio pic after shooting was delayed. The part then went to Saldana who  darkened her skin and donned a wig and prosthetic nose.  “Offensive” screamed the blogosphere critics who point to Simone’s own interviews suggesting Hollywood has long penalised dark skinned actors.

But can actors not inhabit these roles from within rather than their physical embodiment?

“As much as I understand an actor’s ability to channel character, I sincerely doubt Saldana can convey the gravitas and soulfulness of Nina Simone not to mention her physicality. Saldana is the antithesis of everything Simone represented and had to fight. However, I do understand Hollywood’s commercial dictates and investors needing an actor that can bankroll the film. Pity since the amazing Macy Gray who has a similar sad-soulful, bluesy voice and parallel look to Nina Simone would have been perfect; Anika Noni Rose would have been great; even Erykah Badu would have been better than Zoe Saldana if “right” casting was the filmmaker’s mandate.”

Simone, or”The High Priestess of Soul” as she was known, was gifted, feisty and often controversial.  It was impossible to separate her activism from her music, weaved as they were into her core.

Simone died in 2003 but her music is heard often in soundtracks and commercials. One of the best final scenes on film ( spoiler alert!) features a sexy Julie Delpy sharing her passion for Simone’s music with the man who got away, played by Ethan Hawke in Before Sunset.

The legend of Simone is mighty. A cynic could suggest Ms. Mort, in crafting her screen debut, may have concluded that making an unauthorised biopic of the singer’s life would require a little bit of noisy ink. This controversy will only serve the box office, as it did when criticism erupted over the portrayal of black maids in the film The Help in 2011.

But I am perhaps giving her too much credit. The filmmaker thus far has not responded.

What would Nina think of Saldana being chosen to represent her on film? Her daughter says her mother wanted Whoopi Goldberg to play her.

The answer is buried somewhere with that unmistakable voice.

1
We were all children once.
Epic time