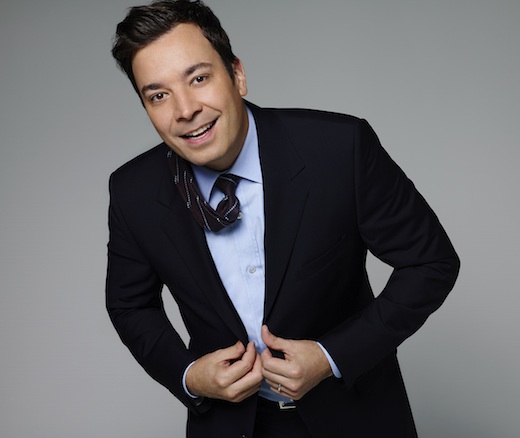 I need my beauty sleep more than ever but Jimmy Fallon says going to bed laughing will give me a longer life.

Fallon kicked off his new gig as host of The Tonight Show last night.  I swear I saw a Canadian, in Fallon’s first steps on stage.

First, he did the humble thing, telling his audience that he hoped to take care of the show for a while, that he would do the best he can, adding that the biggest surprise is that he ever graduated from high school.

Then he was gracious and thanked his parents, there in the audience to support their son’s premiere. Missing entirely was arrogance or Letterman misanthropy, Kimmel smirking, or fake Gee Whiz! Leno sycophancy.

Instead, he offered up sheer enthusiasm.

Rob Ford aside, he is sounding like a Canuck, eh?

Fallon is a brilliant mimic and has won millions of younger fans by generating a party atmosphere, whether hosting the Emmys or on his most recent gig, the Late Night show. His spoofs of popular culture fit neatly into that space between cynicism and sincerity that occupies younger generations: behind every set piece is an authentic fanboy.

I myself became fangirl when Fallon was on SNL where his talent for mimicry was obvious at go. Here’s his audition tape.

Fallon hasn’t promised to change things up entirely. I’m doubtful his is the piercing interview style of the deep reveal.

Some critics question whether the earnest guy who likes to have fun can bring in the numbers. They forget that fun is entirely the point. Lost maybe in our infotainment blur is the now retro concept of sheer entertainment. No one is pretending there will be anything here but an energetic party with that clever boy next door.

Fallon would fit right in to any gathering north of the border. He may say he was born in Brooklyn but let’s call him an honorary Canadian and leave the door wide open.