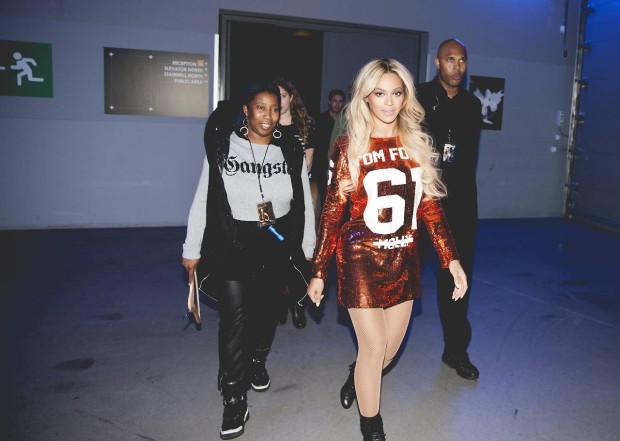 How much of Beyoncé can the world take?

After thrilling the crowd yesterday at Obama’s inauguration, the singer is about to blanket every corner of the industry.  She is set to perform the half time show at the Superbowl.  In April, she begins a world tour to promote her fifth album. She recently signed a $50 million endorsement deal with Pepsi. Her daughter, now one year old, was introduced to the world via a Tumblr blog, an extension of the star’s official website. In a few weeks, Beyoncé’s film autobiography, bankrolled and directed by the star herself, will debut on HBO.

In the film, the singer suggests that she struggles with balancing her public and private identities.

“I’m just as scared as anyone else,” says Ms B.

Perhaps fear explains why she allegedly lip synced her performance yesterday, according to a U.S Marine band spokesperson. Fear about losing control may also explain why she insists on all her waking moments are filmed by a personal videographer and kept in a carefully monitored digital archive since 2005. Huh?  GQ Writer Amy Wallace, in this month’s cover feature,  describes the woman she met for her interview as “Business Beyoncé, hypercomposed Beyoncé“.

“It stands to reason that when a girl owns her every likeness, as Beyoncé does, it can make her even more determined to be perfect.  Beyoncé isn’t just selling Beyoncé’s music, of course; she’s selling her iconic stature: a careful melding of the aspirational and the unattainable.”

I liked her before she married Mr. I- don’t-use-the-word-bitch-anymore-since-I-had-a-daughter.
She has great pipes, knows how to move better than most. I, for one, want some of her sass and bow to her command of every stage.

But show business is a beast that resists control. Beyoncé may just discover that sharing too much can be dangerous. Family life and spotlights are rarely a good combination. God knows I wouldn’t want one on our merry morning routine.

Who can forget this fantastic moment four years ago?
That was a Beyoncé for the ages.

I hope her flame doesn’t flicker too soon.