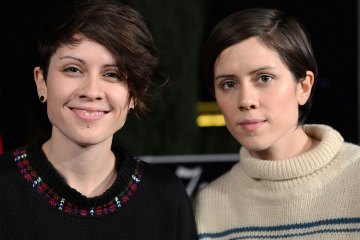 You know them as indie innovators.
Can you embrace them as pop sensations?

Tegan and Sara Quin have ardent fans and critical acclaim that has grown steadily since their first days out of high school in Calgary. They are not household names…yet. The twin singer-songwriters, celebrated as indie goddesses, or as Rolling Stone quipped, a touch emo, but still Canadian-modest, have churned up some bold pop music for their seventh recording, Heartthrob.

“Now, at 32, the Quins have decided to get sweaty. Their seventh album is a veritable bouncy castle of lush, up-to-the-minute indie synth-pop and blown-out radio choruses, less fussy and more whee than anything they’ve done. “ ( Rolling Stone)

Here’s another take:
“Incredibly catchy, fun album with immediately infectious hooks, toe-tapping, head-bobbing beats and songs that will be stuck in your head for days.”( Time)

Is there a musician alive that wouldn’t want their music stuck in another’s head?
Yet, appearing on CBC Radio show Q, the two were asked why they had departed from the fringe.

“People always complain about pop music and what’s on the radio and and mainstream culture being vapid, not having depth or whatever and we thought  what better way to change the world and try to weasel our way into there.Sara and I have already accomplished so much more than we ever thought we would so it’s all icing on the cake.”

The new record speaks to that nip of nostalgia tweaking around my brain waves and no, I don’t mean that shot in their video of Spin-the-Bottle (I won’t go there today as my kids are already squirming). Smudging musical definitions is deliberate— it helps when you know your inspirations. The twins say they had early ’80’s icons like Cyndi Lauper and vintage Madonna in mind when they crafted the new tunes that deftly mine some of their own adolescence.

Hello? That’s my brain on hold at 18. Girls just wanna have fun while they take over the world.

Savvy web chats with real life heartthrobs may help further jettison their career into the big arena. Here is one with musical theatre dynamo, Skylar Astin.

(Astin’s star is also on the rise. After wowing critics in the Tony award winner Spring Awakening, the actor burned up the screen in last year’s clever Pitch Perfect)

Meanwhile, Heartthrob is now climbing the charts and blasting away the ice on my car stereo.  For once, the other riders aren’t reaching over to turn it off.

They’re bopping along with me.

More on the generation divide: Love me, love what I love?