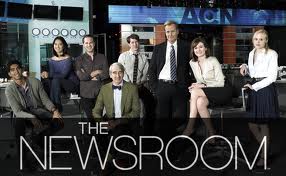 Justin Trudeau chose an apt word to describe the horror that broke Boston’s heart this week.

We agree, shake our heads and shudder.

If we work in media, however, we will try to make sense of it. We will scramble for sources, work the phones, the contacts, and these days, keep a sharp eye on Twitter and all the myriad new media that can make traditional sources seem to play catch up.

It is a dizzying race to get there first.

Last year, our family got caught up in this very circus from the safety of our couch.  We began to watch HBO”s The Newsroom. Written by the brilliant Aaron Sorkin, the show was constructed around real-life news stories, delivered by an idealistic prime time cable news crew.

It was hardly a hit.

Many critics, deploring Sorkin’s preachy characters, leveled charges of elitism and bias.  Are we to believe bias isn’t evident everywhere else? Over here at Wit’s End, I kept watching but that’s no surprise.  Call me a sucker for literate speechifying and witty repartee. Old movies with flinging quips have me enthralled. Who cares if no one on my planet uses his kind of brilliant play by plays? No one I know is Ironman either. The point is an idealized version of humanity, done to perfection also in Sorkin’s earlier hit, The West Wing. I fell for the cast, the romantic underpinnings-hell, why not ignore the irritating low points? Few writers on television can make the heart soar quite like Sorkin.

Now it turns out, from the real-life coverage of the Boston bombings, that Sorkin got it right, making him a prescient philosopher-king, who may also be a pompous ass for all I know but that’s beside the point.

Earlier in the week, we saw that race to be the first result in inaccurate reporting. First came CNN’s breathless announcement, picked up by other news organizations, that a suspect was in custody. By the end of the day, they were backpedaling. Hardly a new phenomenon—few journalists are innocent. We’ve all made mistakes in the search for the story. These days, when the method of getting the story has been turned upside down, I wonder if all that craft that went into reporting is dead.

So what? Isn’t it more democratic to demolish top-down business models and allow all of us to make our own news? The immediacy of Twitter is damn seductive. We are enthralled, now accustomed to rapid-fire discoveries.

When you work in a newsroom, as I did a million years ago and discover there are rules to follow and methods to mine, you understand and respect process and craft do more for the story than just getting it out. Suddenly, I hear news reporters on radio and television, adding qualifying tag lines, this is a developing story or a fluid story or introducing their show as champions of long-form journalism.

Restraint has always been important in complicated news stories, but now it appears to be a choice one makes and then announces to others as an apology or a triumphant line in the sand.

Here is how it played out on CNN.

You can likely find online that now-infamous episode of Sorkin’s fictional but not-so-much Newsroom as they handle the news of Gabby Giffords’ shooting. The episode, called I’ll try to fix you, has suddenly become prescriptive as the Twitter world lit up this week with references to Sorkin’s show. It is worth watching the whole clip if only to imagine a world where people actually behaved in this manner, and not just in Sorkin’s imagination.

The Newsroom was renewed for a second season which will begin this July on HBO.