You make me feel 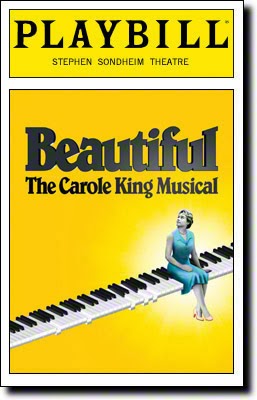 I am back from NYC and still feeling the earth move. Good thing.  I was feeling a little chill after peeling off another year on the calendar.

Carole King appeared every inch the bemused godmother at the Grammys last night, bopping the piano keys, beside fellow singer/songwriter Sara Bareilles. They were there to introduce Song of the Year, an award King herself scooped forty years ago, the first woman to do so, for her classic You’ve got a friend.

As the Grammy’s 2014 MusiCares Person of the Year, King is enjoying a new wave of attention as a new musical Beautiful opened this month on Broadway. 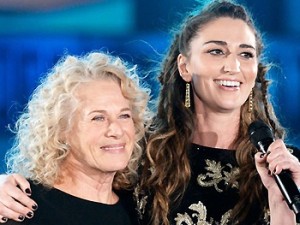 The show follows the Brooklyn native in her early years as a talented teen songwriter up to her legendary 1971 Carnegie Hall debut. This is not a big story with sweeping historical backdrops or tap dancing choruses. Nor are there drummed up plot lines to shoehorn in the hits. It is as unadorned as King herself.  She penned over 100 songs that cause ripples of unexpected recognition in the audience.

She wrote that too?

It is impossible not to fall in love with the cast nailing King’s songbook. Brought in to juice up the narrative are Cynthia Weil and Barry Mann, fellow songwriters who fell into a friendly rivalry with King and her lyricist partner and first husband, Gerry Goffin.

This quartet churned out songs at a dizzying pace and the creators of the show breeze through this industry peek with deft touches. But for all the snappy scenes, the show is one note of brilliance provided by lead Jessie Mueller.  Mueller channels King’s soulful honesty and elevates the show from an entertaining slice to a big wallop of theatre magic. The Chicago native scored a Tony nomination when she played opposite Harry Connick Jr. in On a Clear Day You Can See Forever. This is her first shot at carrying a big Broadway show. If she sings like she did the night I was there, I predict a long career.*

Mining decades old music is nothing new on Broadway (Mamma Mia, Jersey Boys, Movin’ Out), but jukebox theatre isn’t for everyone. The format for Beautiful is anything but fresh, nor is the idea of teen songwriters startling in these days of YouTube angsty wannabes. But beautiful pop songs have a niggly way of benchmarking your life. Audiences, many of them women, are flocking to see the show because King’s music pierced through and stuck.

When Jessie Mueller opened her mouth to sing King’s music, I was right back at that piano, crowded by friends at summer camp, banging out those awesome chords, wailing about feeling the earth move —before I really understood what that meant, or what it would come to mean (yes, yes, YESSSSSSSSSSS!)—her music is imprinted forever in my heart.  I made my kids listen to Tapestry a thousand times, not just to drown out another certain teen songwriter but, if they knew this music, they would know their mom and understand.

King hears this all the time, from fans all over the world.
(Hear King talk about her positive influence here)

Beautiful made me slam right into that tween self right when I needed to remember. That’s theatre gold.

Next up… what else I found in NYC. Stay tuned.

*UPDATE: Jessie Mueller went on to win the Tony Award for Best Actress in a Musical for her performance in Beautiful.

For more on theatre see: