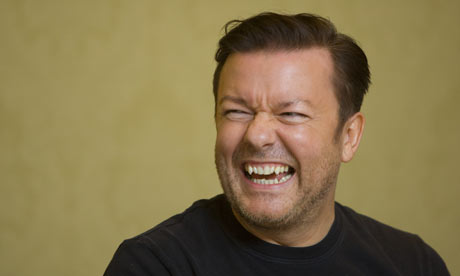 King of Cheek Ricky Gervais reports he learned the best route to creative writing was just being honest. That gem was offered up by his English teacher, as we hear in this first instalment of Fast Company‘s Creation Stories:

No surprise to hear Gervais tipping his hat to an English teacher. My own English teachers were the only ones I listened to, and at least one saved me from my Thespian Self.  There is one English teacher I would have tuned out. He’s David Gilmour, visiting prof at Victoria College at the University of Toronto, who caused a sensation yesterday after admitting he is not interested in teaching books by women. Outraged students have planned a rally in protest. No, we’re not in a time warp here, and yes, this is the same guy nominated for a Giller prize.

In response, popular U.of T. English prof Nick Mount suggested, in an interview this morning with CBC radio, professors have a duty to their students to expand beyond their own passions.

In the bad publicity is better than no publicity camp, I can’t help a little thrill at the outcry if it means we’re all talking about the teaching of English again. This is good news in light of dropping enrolment in the humanities. Adam Gopnik reminds us that we need to learn English as it helps us enjoy life more and endure it better.

Why should English majors exist? Well, there really are no whys to such things, anymore than there are to why we wear clothes or paint good pictures or live in more than hovels and huts or send flowers to our beloved on their birthday. No sane person proposes or has ever proposed an entirely utilitarian, production-oriented view of human purpose. We cannot merely produce goods and services as efficiently as we can, sell them to each other as cheaply as possible, and die. Some idea of symbolic purpose, of pleasure-seeking rather than rent seeking, of Doing Something Else, is essential to human existence. That’s why we pass out tax breaks to churches, zoning remissions to parks, subsidize new ballparks and point to the density of theatres and galleries as signs of urban life, to be encouraged if at all possible. When a man makes a few billion dollars, he still starts looking around for a museum to build a gallery for or a newspaper to buy. No civilization we think worth studying, or whose relics we think worth visiting, existed without what amounts to an English department—texts that mattered, people who argued about them as if they mattered, and a sense of shame among the wealthy if they couldn’t talk about them, at least a little, too. It’s what we call civilization.

Hold those placards up high for the English teachers who get it right.