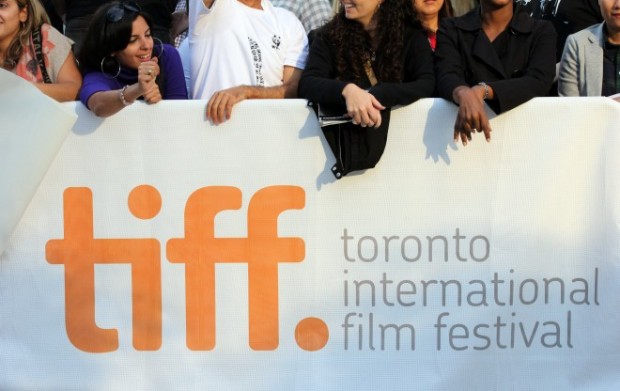 Dispatch from somewhere in line, dimmed but not down yet…

Heard again and again, from the podium, before each screening, is praise for the Toronto film audience.

You are the most globally conscious festival and the audiences are wonderful.

Fantastic to engage with audiences who are passionate

Sweet set ups? It wouldn’t be a stretch given the sycophant suck ups known as entertainment press. I know. I used to work with them. Everyone is your BFF.
But these are not press audiences. These are the people that filmmakers hope to touch. Not fanatics, waving arms through the barriers, but diehards, who stay after the credits roll to ask the director Why this shot? Where did you come up with that idea?

They may boo in Cannes but here, if less than thrilled, only polite applause. A for effort. The laughs are generous, ovations long after the last scene fades.

Director John Krokidas told the audience at TIFF that his feature debut Kill Your Darlings took ten years to get to screen. Patience, persistence, passion-these are the messages from the TIFF podium.

I’m here to tell all of you who are struggling with your creative projects to never give up.

You talking to me?

Indeed, the creative classes were chattering all week and the noise was deafening. The trades are all here, dealing and dining. Yet, there is a duality in the festival circuit, another layer beneath all that commerce.

Call it the heat sizzling from all these hopped up, creative crazies, coming together, invading coffee shops, restaurants, hotel bars and lobbies, standing on street corners, inside movie theatres.

Decent eavesdropping and a few of your own improbable dreams kicking around make all this creative juice wildly contagious.

The great films inhabit the space between truth and deceit, love and anger, sadness and joy, comedy and tragedy. They chase after ambiguity and challenge the viewer to look beyond the narrative, to find answers in light, shadow and sound.  Early on in my list of screenings was the documentary What is Cinema by Chuck Workman, known, among other works, for the great collection of clip reels seen at the Oscar telecast every year. In an exploration of over 240 movie clips, Workman’s film was both an homage to those auteurs who pushed the art form to new frontiers, and a gentle nudge to viewers to be a little more daring.

It’s like looking at a still life of a fruit bowl. Who cares if the apple is sweet or sour? It’s the style that is everything yet we are consumed with content.

On Sunday, we will know what Toronto audiences have chosen as their favourite of TIFF 2013. I know what mine are. Check back here for my full highlights when TIFF wraps up.