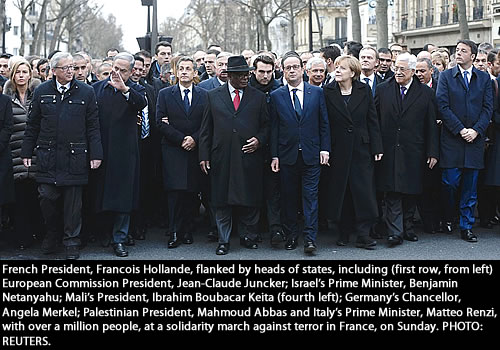 What a strange and wonderful day yesterday was.

It began with a glorious rally of solidarity in Paris where world leaders locked arms and walked together in a stunning show of unity. For a moment, Paris was “the capital of the world”,  French president François Hollande remarked proudly, noting the unprecedented crowds, over a million, of all religious persuasion, of all colours, mothers, fathers, children, youth. 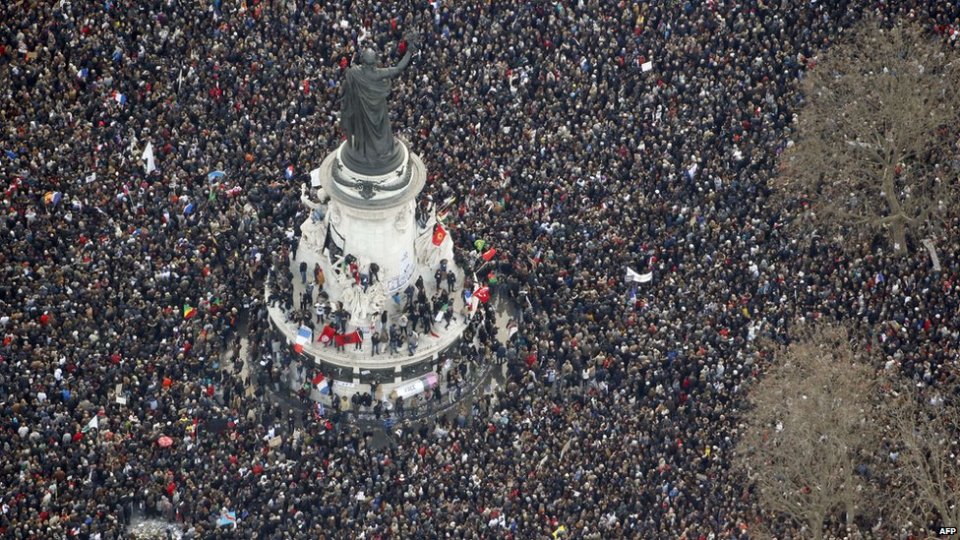 Sundays mornings around here are leisurely ones, if we can swing it, with media preferably turned off. Not yesterday. Glued to the screen, there I was, tears streaming, moved by this profound gesture, “defiant joy” said one observer.  The rest of the family drifted down, awakened no doubt by the volume turned way up, as I soaked in all this armour against despair at the darkness of daily world news, that familiar onslaught threatening to cloud any flutter of optimism.

Discovering new dimensions to places I love is life affirming.  I’ve only been to Paris a few times, the most memorable being a visit to see my husband, years before we were married, while he was a student at the Sorbonne, a visit famous for the near miss of abandoning the second semester of my third year of McGill. 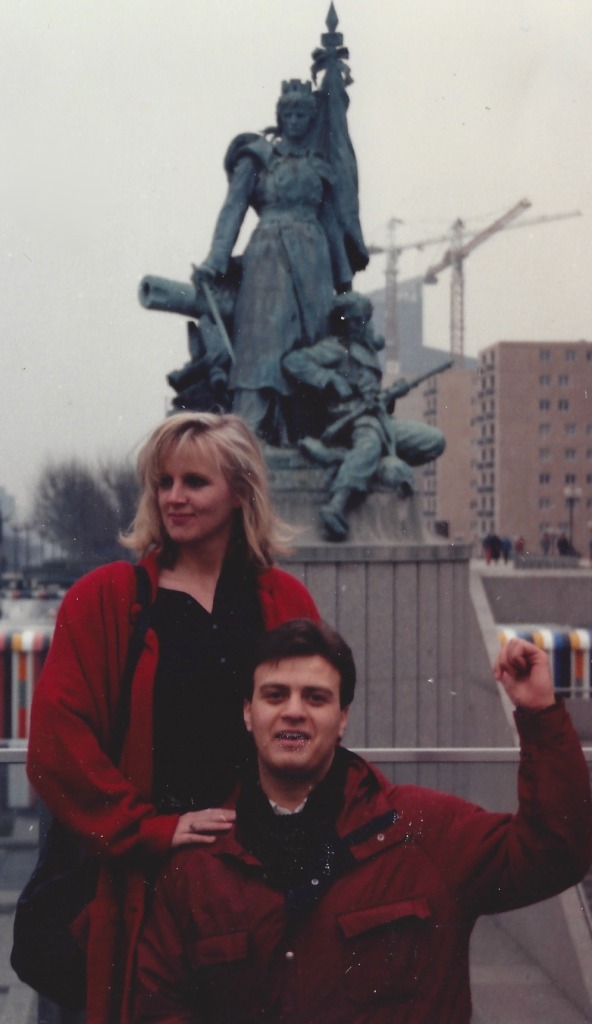 Did I really need to go back home? (No, but I did, sobbing, scribbling furiously in my journal as I flew back to Montreal). 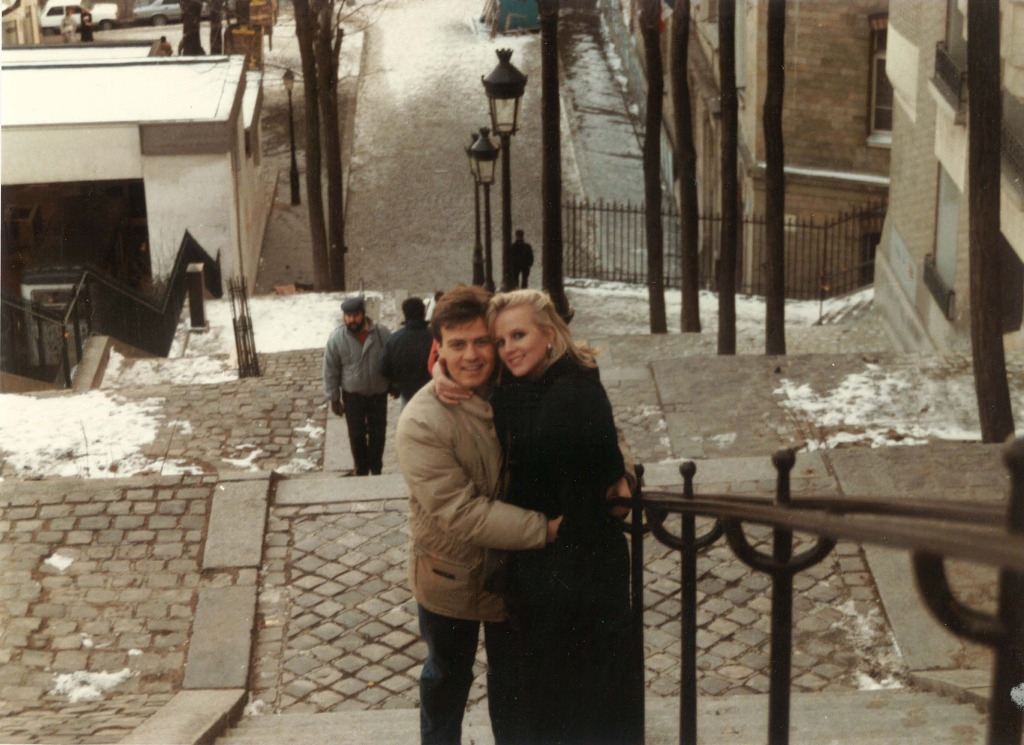 To imagine these same historic streets, filled with signs and placards insisting they will not be shaken, was thrilling.  These were people who had just suffered through brutal attacks, attacks sure to expose cracks in their culture. But what’s this? Not cracks but crowds, far more than anyone predicted, with a common message.

“Our entire country will rise up toward something better.”

Hours later, we were back, staring at a different kind of crowd, streaming into the Beverly Hilton, a different planet really. Yet, linked they were, these two crowds, one buoyant, the other botoxed, by a lapel pin, worn by several attending the Golden Globes. Dame Helen Mirren wore a pen to show her support for free speech. 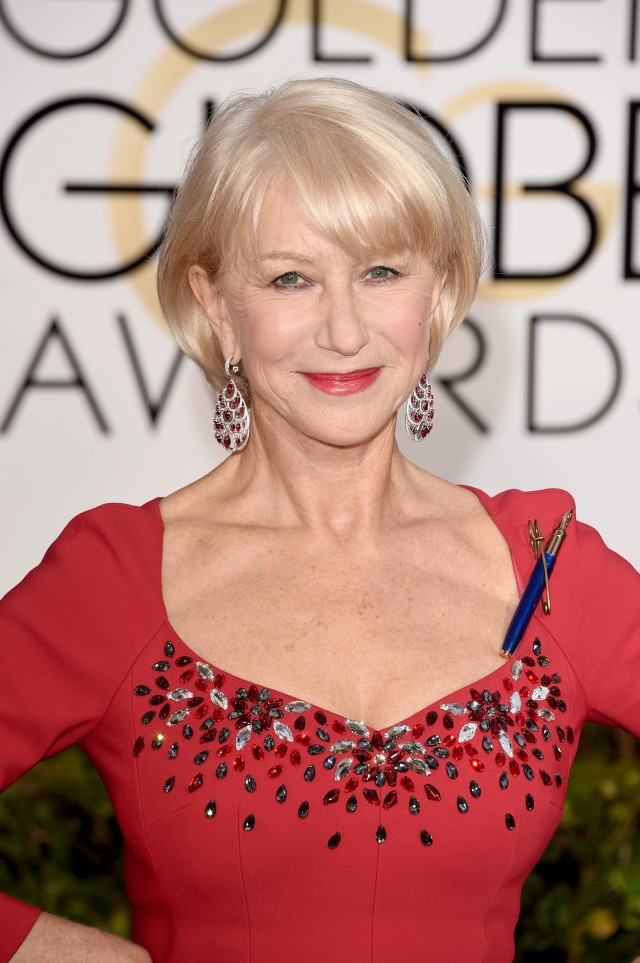 Others held signs of support as they walked the red carpet. George Clooney did nothing to quell rumours that he is considering running for public office as he accepted the Cecille B. DeMille award and used the spotlight to make his own statement of support.

Clooney’s speech was a surprise to anyone who has sat through countless DeMille award winner speeches, often an exercise in ego, as recipients meander over a decorated career. Here he was, throwing it back to the “despicable, spoilt, minimally-talented brats” (my fantasy BFF’s Tina and Amy hitting the host mark once again) and reminding them of their good fortune. Always the cool cat, Clooney melted hearts with his public nod to his new bride, perhaps shutting down forever the joke made just last year at the very same ceremony by the Fey/ Poehler team.

“Gravity is nominated for Best Film. It’s the story of how George Clooney would rather float away into space and die than spend one more minute with a woman his own age.”

Let’s call his a campaign speech, shall we?

In a night usually reserved for silliness, Clooney and company seemed to seize the tone of the day, if that’s possible for a crowd of overpaid celebrities. Other high notes were actor Maggie Gyllenhaal noting the increase of parts for actual women, Michael Keaton’s lovely tribute to his working class background, Kevin Spacey telling the audience he just wants to be better, Julianne Moore’s all you need in life is work and love, and director Richard Linklater acknowledging the 450 people that really should be sharing his trophy for best director of Boyhood.

What won, what lost is for others who follow the awards season as a blood sport. I was happy enough to see Leviathan scoop best foreign film as it will just mean more people see that brilliant piece of work.  Just about every winner seemed deserving and there wasn’t a film or performance honoured that I didn’t like, although why The Lego Movie didn’t win best animated feature is beyond me. (For more on my favourites of the year, read here)

The biggest applause from the crowd erupted for Prince. No one was happier than me.

The biggest applause from our couch was for Amy Poehler and Tina Fey and their “Would you rather” routine.

Didn’t I tell you it would be a surreal day? Starting with solaridity, ending with saucy sex talk?
Can every Sunday be this good?