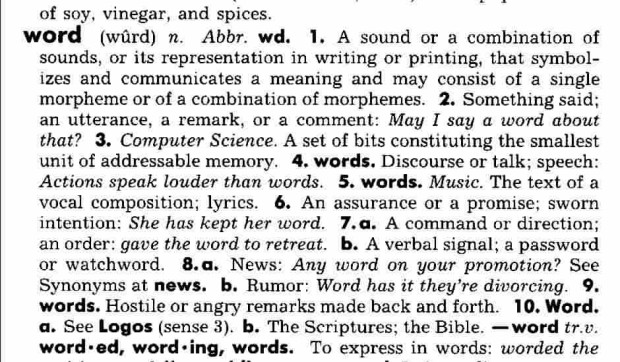 If you ever have the chance to study with a master, take it without delay.

Earlier this year, in a room of a dozen superior talents, I studied poetry with Ken Babstock, shortly after he had just scooped the country’s richest prize for poetry, the Griffin. He was nothing short of brilliant.

We spent the week luxuriating in language. These sessions among writing peers are not for wimps. Be prepared to see beloved gems shredded apart, with the gentlest of touch, then start again, again and again.

Ego? Park it outside.

I know nothing. I want to know everything.

Every wee word was examined. Could we find a better one that avoided the breach between poet and reader?

A worthy mission with many in the hunt.

What exactly is the best word in the English language?

Ted McCagg thinks he knows the answer.  In his blog, Questionable Skills, the Portland Oregon creative ad director has been searching for the best word ever.  As he told Atlantic magazine, he was tempted to give the honour to fuck but felt, while awesome, it was too everyday to win.

“McCagg got the idea for the project, he told me, while he was sitting in a restaurant. “I was listening to a few people talking at a table near me (I’m a chronic eavesdropper) about their least favorite words,” he explains. “The requisite ‘moist’ and ‘panties’ came up, each met with the collective ‘ewwws.'” It occurred to McCagg how passionately people feel about words — not only in terms of their hatred for certain words (underpants, slacks), but also in terms of their admiration for others. “I started thinking about the words that I loved,” McCagg says. “Ubiquitous. Kiosk. And yes [your correspondent’s personal preference among the choices], Hornswoggle.”

The winning word was ….diphthong.

That other great wordsmith, Shakespeare, had some fun manipulating words on the page.

As for this humble word lover, I could hardly choose a favourite.

Although I do make frequent use of that early 16th century F-word….