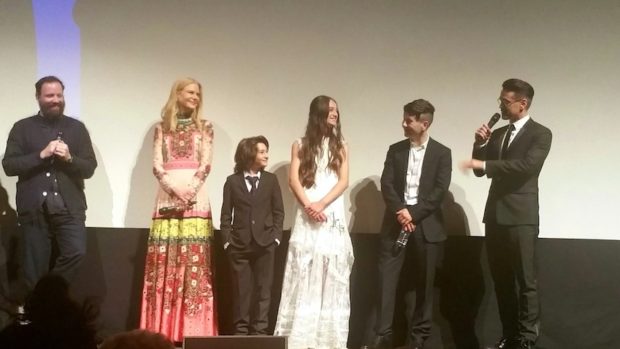 Part of the TIFF experience is hearing from those who made the film, in brief Questions & Answer sessions following the screening. Cringing at the odd dumb question is part of it; mostly, it’s a peek, a very tiny glimpse, into the one of the world’s most collaborative art forms.

Actors can’t always articulate what it is they do. Directors are often eccentric or mumblers and sometimes they ditch altogether because speaking to an audience who have paid money to see their film as it begins to make the rounds in public isn’t a priority to some. Or they have to dash off to another project. 🎵 There’s no business like show business … These are performances after, all, these sessions with the public. And when they click magically, it makes that TIFF ticket (more $ every year, sadly) a meaty thing.

If the cast has gone out to dinner during the screening, you may find them tipsy when it comes time to answer questions. That provides some spice…or maybe they’ve come from an all night party straight “from the bar”to an early morning screening, as Ryan Gosling was introduced a few years back for Drive. (I was one of few women in the audience there for a high testosterone-fuelled film. Had my own little hubba hubba all my lonesome, I did.)

Sometimes a director will completely deconstruct a film, so eager she is to share her vision. Or an inexperienced actor will flip out at all the attention. My heart broke a little this year when I saw the two pint-sized stars of The Florida Project waltz on stage in their ballgowns, and then share the story of their casting with the audience as if they’ve been doing it all their lives. 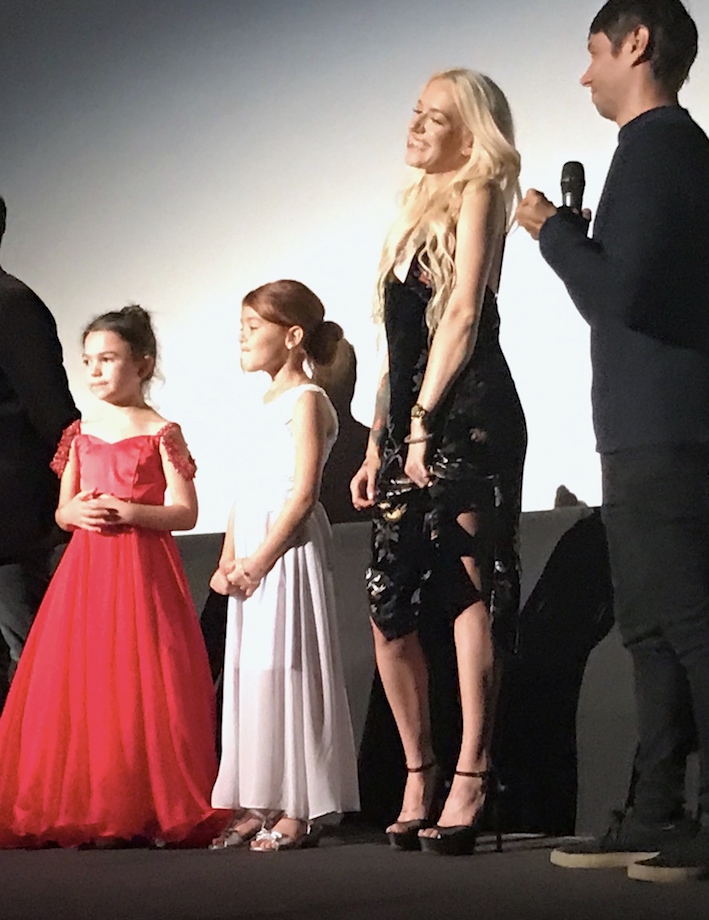 Occasionally, actors deliver gold. Directors share something profound. Or a cast riffs and quips with each other, demonstrating such solidarity that everyone in the audience feels part of the gang, if only for a moment, even better when everyone involved in that theatre knows the film they’ve just seen is going to be a huge hit.

Among my favourites this year: the gorgeous Belgian actor Matthias Schoenaerts rapping freestyle following the screening of Racer and the Jailbird (a flawed film but he’s as fantastic in this as ever); 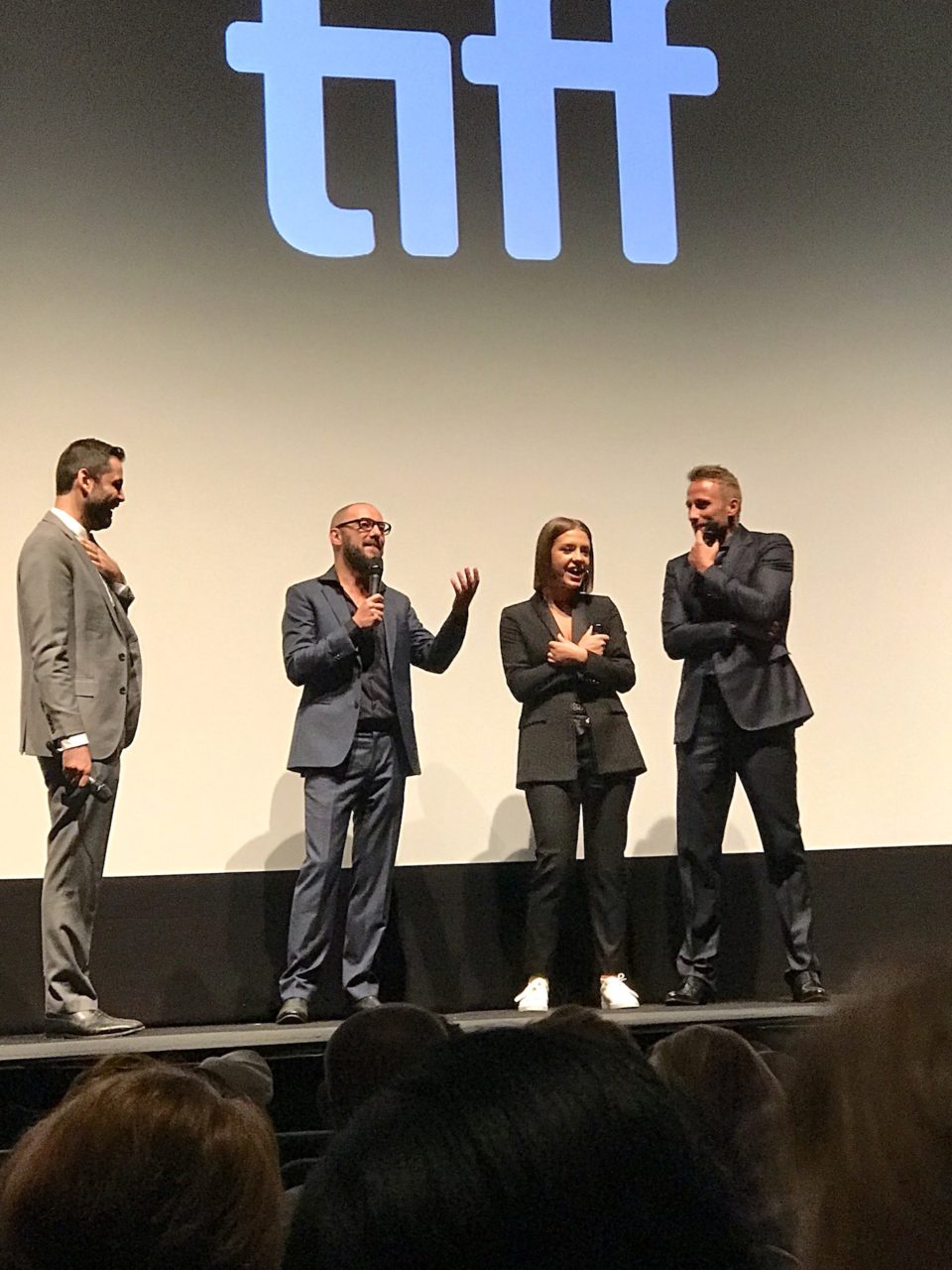 Master filmmaker/writer Paul Schrader revealing his former attraction with “action, sexuality, psychological realism” before turning to his roots for a deeply spiritual film, First Reformed (one of my faves this year); Razzia director Nabil Ayouch gushing over his wife Maryam Touzani’s inner beauty and starring role (her first time in front of camera; she also co-wrote the film)—the two of them were easily the most beautiful couple of TIFF—; Greta Gerwig in joyful tears after the wild applause following, her directorial debut, Lady Bird: “I’ve basically been emotional this whole press tour!”; Indie darling Dee Rees sharing awesome and detailed director notes about casting and filming her epic, Mudbound—other directors might want to take notes about her generous and articulate approach; eighty-five year old Alanis Obomsawin’s stunning red dress, stockings, and heels as she gracefully walked across the stage and spoke passionately about her long career.

Here are some other highlights from the Q and A’s sessions:

I just wanted to go Italy and eat pasta.

-Arnie Hammer, on why he accepted the part of Oliver in Call me by your name

It was a great opportunity to work with a master. The reason I made this movie because it scared me. It made me uncomfortable and challenged me and pushed me.

I like to think this is a family movie, a movie for families. It’s about the invisible bonds that create the people that we are and how the transmission of emotions and knowledge and the capacity of compassion between generations and people in a way transform people for the best. It’s utopian maybe… but why not?

-director Luca Guadagnino, Call Me By Your Name

It’s all on the page. It’s so easy to get that wrong in the writing. It’s so easy to take a tone that is snarky or condescending or sappy. It’s hard to look back on your life and talk about what’s important to you and to communicate that on the page and if it’s there for the actor, it’s kind of easy because its already there for you to do.

I always wanted to direct. But I never had enough time enough hours under my belt of being on set with other directors. Still, I thought it’s time to jump, kid. You’ve got to do it even though it’s scary, you have to do it.

I knew the fourth season of Veep would be my last one. I wanted to do something completely removed from American politics and do something about a paranoid narcissist who is terrifying his country.
Lets do that. At least Stalin has good hair …And he dies.

-writer/director Armando Iannucci, on why he chose Russian history for his next project, The Death of Stalin

I first saw it in Cannes and it’s, well, fucking disturbing and… I loved it. I thought it was masterful.

We just find things we want to explore as much as we can parts that reveal as much of human nature that we tend to to shy away from. Thats the attraction for me: coming up with stories that put human beings to the test.

-director Yorgos Lanthimos, on where he gets his creepy ideas from

You will not even want to look at me after this movie. It came out of a place of frustration and rage, but I wanted to make a film not about my mother or your mother but our mother, and I just wanted to show respect for our mother who has given us life and tell the movie from her perspective and that is her tale you about to see. You are in so much trouble.

-writer/director Darren Aronofsky apologizing to the audience before the premiere of his film, Mother!

-Darren Aronofsky, saying how he loves TIFF audiences because we wear our hearts on our sleeves

It was nice to hear from filmmakers on Twitter and Facebook “your film has inspired us now we feel we can make films”, it was a democracy of filmmaking..that was really nice to be part of that. It felt great and I’m an advocate of that. But in 2017 the death of celloid is a very real thing so as filmmakers we felt that we had the opportunity and the money this time around to shoot on film, There was of course aesthetic reasons to shoot on 35 as well…but it was a way of supporting the film industry. We want to see all mediums available to all people.

It feels good to act…obviously.

-Valerie Cotto, six-year-old actor on being cast in her first film, The Florida Project

I didn’t know what to expect but what I really appreciated is that he treated us all like equals. He didn’t act like he was better talent than anyone else but he really helped us a lot and treated us like we were just on same level. Having him around was so helpful as it brought us all together on the same page.

You can either feel obligated to have a relationship with someone you’ve been brought up with, should you, do you want to?. I thought it was beautiful to discover two people who have shared something other people in their universe haven’t seen. So that is always is something that will make them have a close bond yet they are different personalities and have chosen to live their lives in different ways. So that is what drew me to this…the sisters and their relationship.

-Alicia Vikander, on her role in Euphoria

Yeah, I’m angry, I am 60 years old and I’m a woman and have had a few things that pissed me off so. I’ve never been as furious as Mildred but I’ve had enough to work on.

-Frances McDormand, on her role in Three Billboards Outside Ebbing, Missouri

Anyone who’s an optimist hasn’t been paying attention. These are not optimistic times. When you are in serious times such as this, I think it’s good to make a serious film. So I don’t have an optimism about the species, homo sapiens, so it’s kind of hard to have an optimism for cinema. The life form that will follow us, they’re going to make one helluva museum, a Museum of Humanity. Hopefully there’ll be a nice Cinematheque in it so our followers can watch the movies of humanity.

-Paul Schrader responding to my question about the future of cinema

If I die tomorrow, I wont worry as much as I would have ten years ago. Because it’s incredible what is happening in this country. Really, I’m telling you. Where we’re going, I know we’ve never been there before. It’s so special. I don’t know how to tell you how great it is. The word hope is not good enough.

-Master documentarian Alanis Obomsawin (in tears) on making her 50th film on the Norway House, one of the largest First Nations communities in Manitoba, and a model for progressive communities everywhere