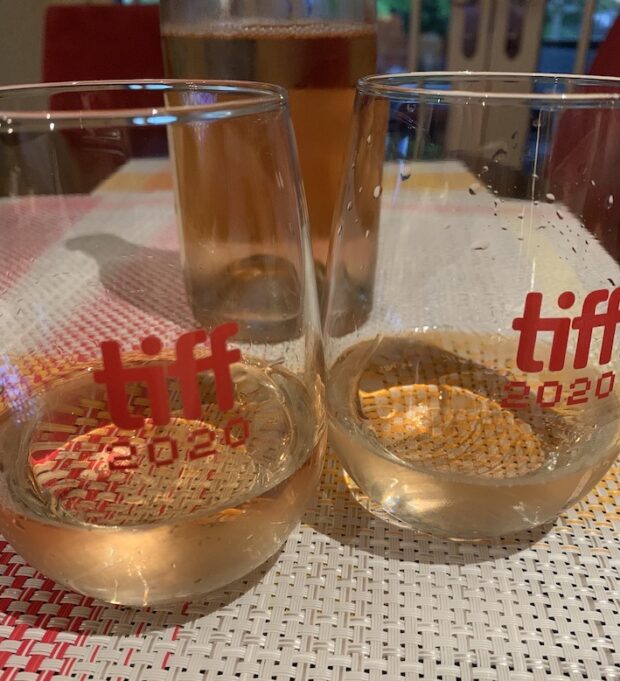 The fact that film festivals are continuing to happen; improving, adapting making it all happen; is very moving to me because in the press and in the popular culture what’s happening and becoming sadly common to see is that cinema is becoming marginalized, devalued, and categorized as some kind of comfort food. To celebrate its very existence then is all the more important and necessary. We can never remind people enough that this remarkable art form has always been and always will be much more than a diversion. Cinema at its best is a source of wonder and inspiration.

I’m with Scorcese: props are certainly due for the team who brought us TIFF 2020. Thankful we were for a slick digital package, but let’s call it too what it really was: a sustained binge. Signing up for TIFF, the pandemic version, meant letting go of the rush; the buzzy street chatter and pulse of a few thousand new creatives crowding the corners and cafes. Let go of new nerds to nosh with, in between jammed screenings. Let go of sunlight on the scurry from one theatre to another. Let go of the tiniest moment when the theatre darkens, the shuffling ends; we are under the spell together; a collective hush.
Is there anything collective left anymore?

When it’s over, we might be sniffling wet tears in agreement at a devastating plot turn; outraged at a trippy ending to an otherwise wild ride; or jumping to our feet: TIFF audiences are notorious for their warmth—if they like you, you’ll hear it. This is again not the case in Life.

Let go of the cast and creative crew, barely containing their excitement, right there on the stage in front of you; listening to them unpack their process. Sharing in their wonder at this provocation, this thing of beauty, this thing their particular collaboration created. Let go of the break from the banality of ordinary —my couch, my damn couch, is it not sick of me yet?—and just embrace it, this new brave attempt at saving a spectacular Toronto event.

Some of this, you, who have been here before, know.
(Read Why TIFF?)

Adapt. And say yes to a date with global storytellers. I can do that. Come along with me for my favourite picks.

A date with Chloé Zhao is a welcome one.

I personally cannot think of a more deeply empathetic filmmaker than Chloé. She challenges me as a viewer by not allowing me any distance from her characters. Her work is so searingly honest that I can never objectify the lives that I am observing.

I loved The Rider, an earlier work the 38-year-old Chinese-born filmmaker wrote and directed. Her latest, Nomadland, stars the familiar and fierce Frances McDormand as a mid-sixties widow negotiating entirely new terms of existence after her company town is swallowed up by the recession. Her new life living in a van as she takes to the road through the American West is really a hymn to self-sufficiency and solitude, even as it amplifies friendship, family and the holes they can and cannot fill. There are many reasons to cheer about this gem. Cheer I did, inside our car at a drive-in down at Toronto’s lakeshore, where honking was the (obnoxious) replacement for applause. Cheer for an unadorned middle-aged woman carrying a movie without the usual tropes. This, dear readers, is a rarity in the cinematic landscape, as uncreased faces threaten to erase any real concept of age on and offscreen. That Fern, our protagonist, is played by a two-time Oscar winner could have sunk the film with thespian weight…except that McDormand is too clever, too good at what she does. Her performance is layered, consistently interesting. Cheer for visual poetry without any treacle: sentiment is kept tightly in check. Cheer for a character with life behind her—for once, coming of age fireworks are for someone else. Instead, her growth feels authentic and quiet, yet no less heroic. Cheer for Zhao’s use of real nomads playing themselves with all the charm and whimsy only real life can provide: each of their narratives offering insight and further commentary about the failure of the American dream. Ignore all the noise about awards. Nomadland won the annual TIFF People’s choice award and is on track for many other accolades. Somehow it transcends all of that buzz and lands at something more profound. A global pandemic means everything familiar is gone. New rules, new roads. This movie was made for now. In a rare move, the film premiered at the Venice Film Festival, TIFF, the New York film festival and a special edition of the Telluride fest, all on the same day. Cheer for solidarity in unprecedented times.

Before the pandemic, for a spell, I ran a support group in my basement for peers challenged with a system that failed to meet the needs of the elderly, our elderly. We were small but mighty; solace and support our only currency. Witnessing our parents’ diminishments alone was often unbearable. Grasping the reality is truly experiential: you don’t know it until you’re there. Then along comes a movie like The Father. I watched in disbelief, tears streaming, grateful that someone so capable was capturing this essential question with such accuracy: what do we do with the people we love when they lose their minds?

French playwright Florian Zeller picked up the Moliere award in 2014 for his play, Le Père, which played around the globe to great acclaim (including here in Toronto at the Coal Mine Theatre). It is now a film with two cinematic giants: Sir Anthony Hopkins, as a father struggling with dementia and Olivia Colman as his daughter entrusted with his care. Zeller adapted it himself (with help from co-writer Christopher Hampton) by using the set as a character in the film. That set, and how the filmmaker and crew tweaked it purposely daily, served to confuse his own cast and provided the necessary disorientation for viewers to understand the terrors of dementia. That it plays like a thriller is intentional: Zeller is after the very confusion of a diseased mind: he wants you to feel the way Anthony does as he tries to place himself in his space. Is this my flat? Is it my daughter’s flat? Is it a room in long term care? They all look the same. Or do they? Who are these people? Is this my son-in-law? Is this my daughter really?

Tone and pacing are, like the film’s two spectacular lead actors, in fine form. The film may be sombre but never tedious. Watching two of the industry’s finest actors giving their best work is a feast; this film includes one of the most heartbreaking scenes of the festival. Yet Hopkins himself says it may just have been the most fun he’s had on any set, even a tiny studio in northwest London.

Working with brilliant actors makes it easy. I don’t play tennis, I’m not a sporty person but I guess it’s like playing tennis when you’re working with Olivia. Really easy.

Expert, hardly but I do have front row seat with my own mother who has struggled with dementia for too long. A kind social worker told me what my siblings and I are experiencing is “ambiguous loss“. The Father is a superb iteration. I saw myself up there, Mom too. Good cinema works as a mirror. Here in Canada, one in four of us will develop dementia in our senior years. We are aging yet our films and our culture deliberately lean into youth. Only within a festival would this film get heavyweight traction.

Serbian actor Jasna Đuričić wins my vote for the best actor of TIFF 2020. Equal applause to her director, Jasmila Žbanić, as this was easily the most impactful film screened among many hard hitters this year. Hard to watch, necessary to watch: these are the films festivals should herald; distributors heed. Based on true events is often a worrying preface note when I see it scrawled across the screen in the opening credits of fictional films. Finding a way into complex historical chapters through personal stories is always tricky as what is often lost are subtle grace notes and fully drawn characters. As Aida, a UN translator, Đuričić is ferocious as she carries the film with urgency in every frame as her character tries to save her family amidst bureaucratic chaos during the 1995 Bosnian genocide. I believed in her, was there with her in all her glorious dimensions, flashing her credentials in fury at the horrors unfolding. Urgent and harrowing, the history lesson is served beautifully through this intimate study of a woman straddling two worlds in wartime. Like Nomadland, here again, is a rare glimpse of an older woman whose smarts and strength unfold without cliché, without cringe-worthy false notes. See it with the young adults in your life who are told over and over they need to be resilient. Without context, resilience becomes meaningless. Aida is a way in, as all great art can be.

Here was a film I wanted to hate: a bunch of middle-aged white guys decide to experiment with booze under the guise of academic research. Except here is mesmerizing Mads Mikkelsen and his pal, director Thomas Vinterberg, reunited after their amazing Oscar-nominated film The Hunt. Here too a sizzling cast and energetic direction and, dammit, you just can’t help loving all it. Humour is so rare at TIFF, and when it travels in the lane of pathos, even better. The insane experiments, the idea that you recognize yourself in all of these loveable idiots, that you know already where it will go doesn’t matter a hoot. It is all wound up with a memorable scene, one of the festival’s rare uplifting and memorable best. This is a winner, for reasons beyond my own household, where we ourselves enjoyed a daily cocktail..or three in the early months of the pandemic. This is tricky ground to play on with few easy answers but in the prerecorded festival Q&A’s, Danish director Thomas Vinterbeg was clear where he found inspiration: his own country.

We Danish drink a lot. But still, we talk about health and about a reasonable well-behaved life so there’s a gap between our behaviour and our wishful thinking of our behaviour.

Thomas Vinterberg, director, Another Round