Back at school, changing the world not so quietly. 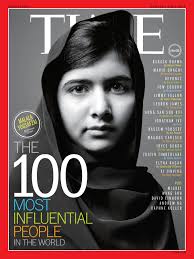 Time has chosen their 2013 list of the 100 most influential people in the world.

This is the 10th such list from the magazine, one that measures future potential as much as current success in various fields. Only 35 women made the list, including Malala Yousafzai, the Pakistani schoolgirl who survived a vicious attack by the Taliban. Her ordeal and passionate advocacy earned her one of seven cover portraits.

“Malala, the human incarnation of the inhuman Nietzschean precept that whatever doesn’t kill us makes us stronger, has been catapulted to prominence and handed the resources and connections to campaign on a grand scale.”

I wrote here about Yousafzai last fall, hoping my children and their peers would include her when looking for heroes beyond the pop culture pin-ups.

Today, the young activist is back at school, this time in the U.K., at a girls school in Birmingham.

After a week where we were reminded of the unsettling tides of the new terrorism, can I help but be cheered at this video of her tour in her new school?

(BACK TO SCHOOL TIME VIDEO)

Recent Chronicle posts you may have missed: