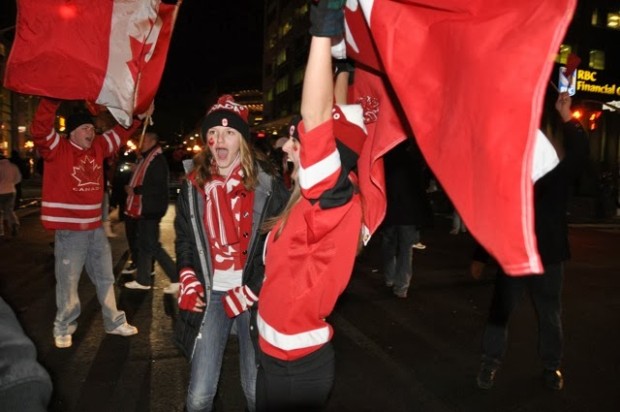 We broke some rules these past few weeks in the house of the messy kingdom.

Being a parent is, at best of times, onerous but, every now and then, in a lifetime of second guessing, a long comes an easy call.  Need some spark with your cereal? Those toothy winter Olympians do a much better job than my tired “get moving” tirades.

Decency. Now there’s an old fashioned idea splayed across a landscape of podium hoggers, from the Canadian athletes at least. They remembered their please and thank you’s. They were gracious about the slog that got them to the top. Nobody does it alone, they told us. Nodded with civility to their peers in the spirit of “friendly competitive rivalry”. Or so said Jon Montgomery, the latest guest at my Fantasy Dinner Party, of the fierce competition in the Olympic arena. Montgomery’s victory march, beer mug held high, was goofy and glorious. He was only one of a team that spewed out guts and grit. The dormant TV producer in me marvelled at the true story arcs on our screens every night. Need some heroes in this generation?  Right here, smack down in the midst of what my mom used to call “the boob tube”.

No surprise then that the kids watched the Winter Olympics before school, after school, during dinner, after dinner. I had the thing on all day and found reasons not to get any work done just to watch more. We stayed up past our bedtime learning about sports we would dream about trying, tattooed maple leaves on cheeks and hoped teachers wouldn’t notice, or maybe they would and join the collective high five of a nation gone mad with glory.

On the big day, the big game, the biggest moment, we hollered with such fierce pride that we think we woke up the cranky neighbours. We jumped into the car and honked our way down Yonge Street, pride hanging out the windows. Ran into the road and sang our anthem as wolves howling hurrahs on the frozen turf.

“the best night ever!” 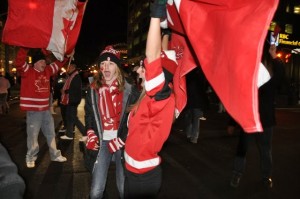