Yes. You can go back…almost 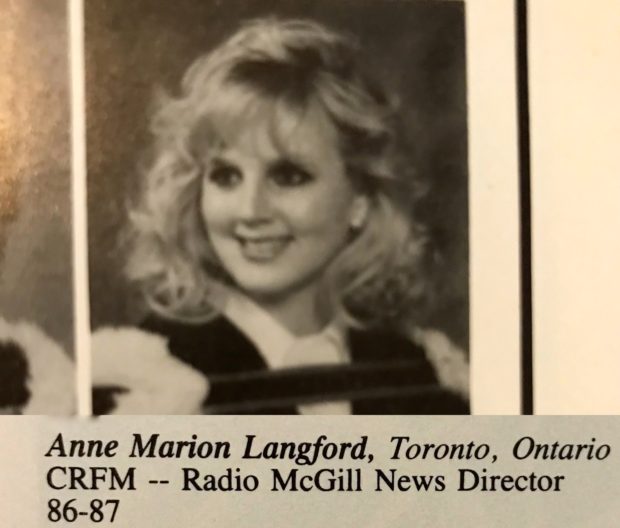 Thirty years ago I left Montreal with the kind of longing you pack away but never leave behind.

It was here film became a passion, and broadcasting a career path to pursue. Here I learned life begins after midnight, or it did for those college years, where hours stretched into the horizon. Away from home, away from a city where everyone seemed to know someone in my large family— in those years, few from my high school came here out of province — in this exotic place, I was free to dance, dally, and doze if I wanted. Check. Check. Check. We were never going to grow old or faded. I don’t remember all of it. That’s why journals were invented. 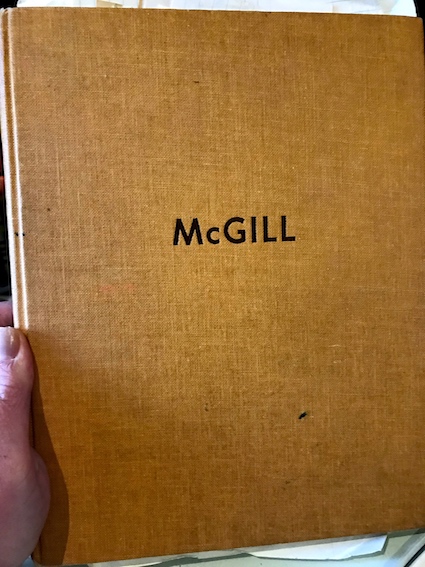 Alas, once I settled on a career in media, I knew my French, merely functional, wouldn’t get me far enough in this bilingual town. Back to Toronto I went, degree and radio demo tape in hand, and the rest you know ...

It’s helpful to forget a little. Now I have a daughter having her own love affair with this magical city. Life on campus is as charmed as ever. McGill Homecoming twinkled for a weekend of memories. Can you go back? 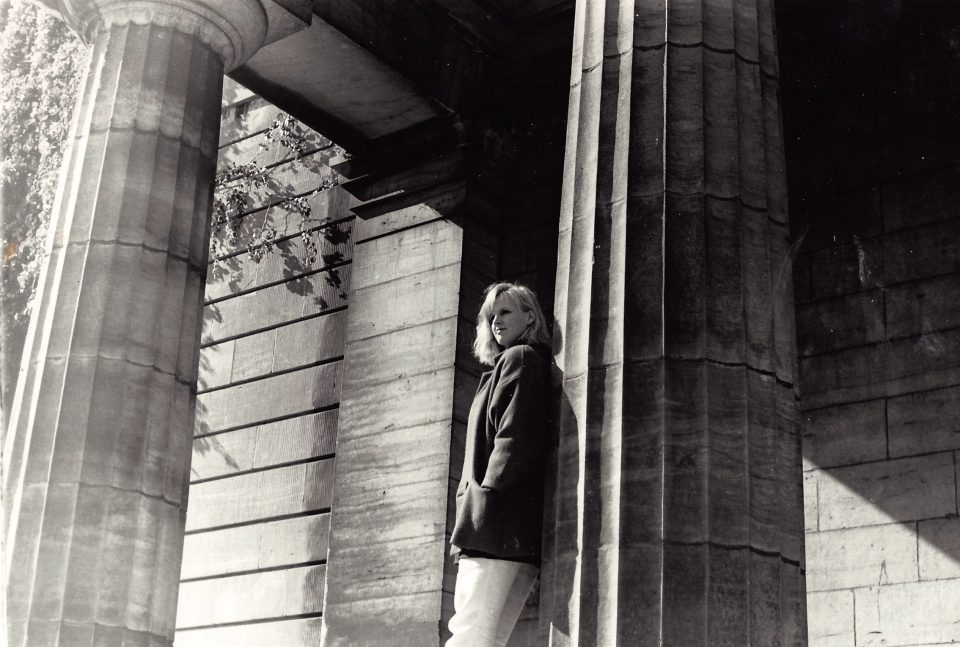 Wandering through McGill campus is to meet your former self a few hundred times; whether inside CKUT FM radio (once a dingy basement studio) where current staff toured me around and introduced me, with some excitement: She’s from the ’80’s!!! (just in case I wasn’t feeling old already); or the new McGill student executive offices, a swankier version than Peter’s old digs as VP student affairs; and of course, a lecture hall or two. Fortunately I remember lectures, even if some class time was spent… elsewhere. 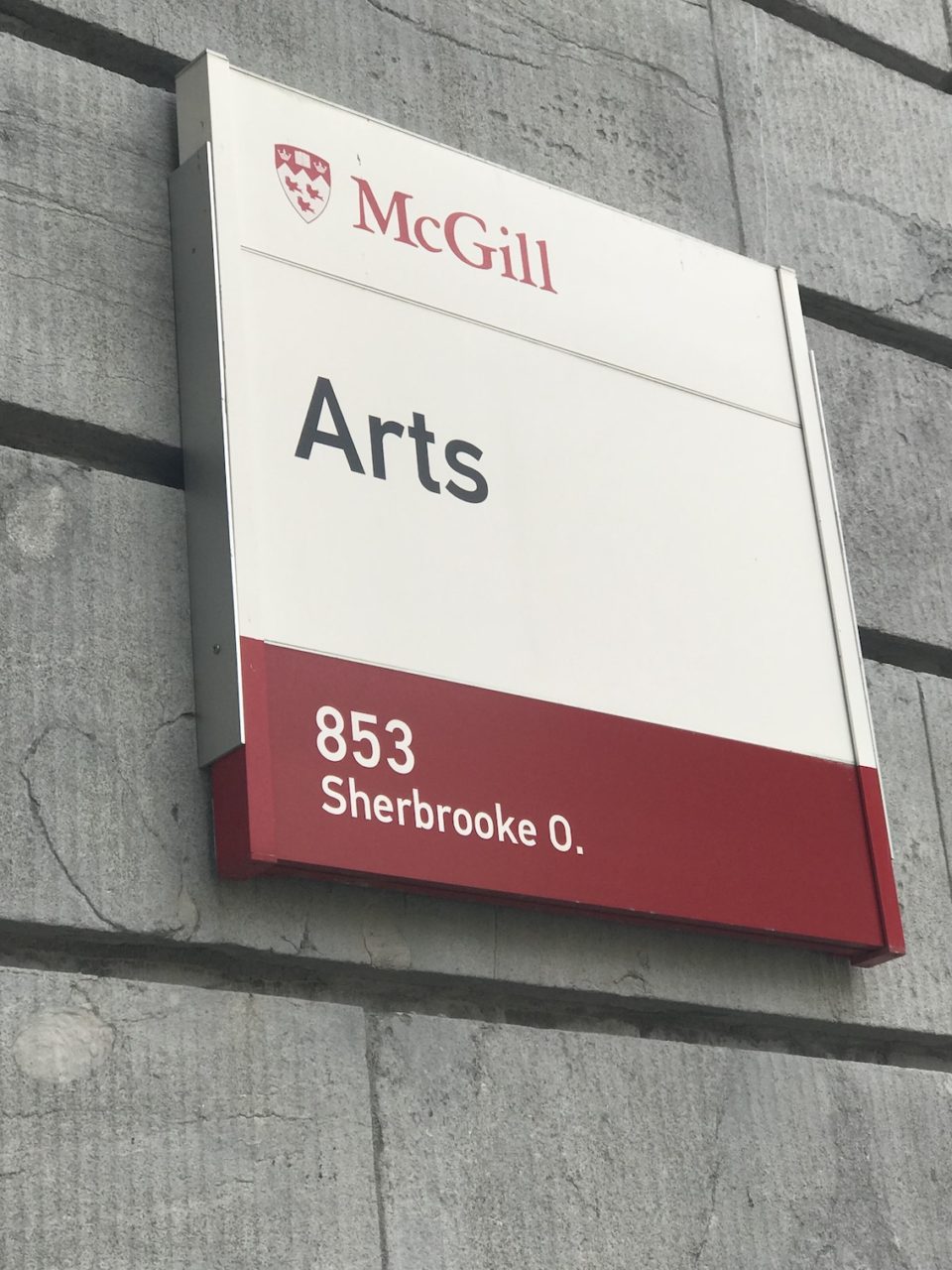 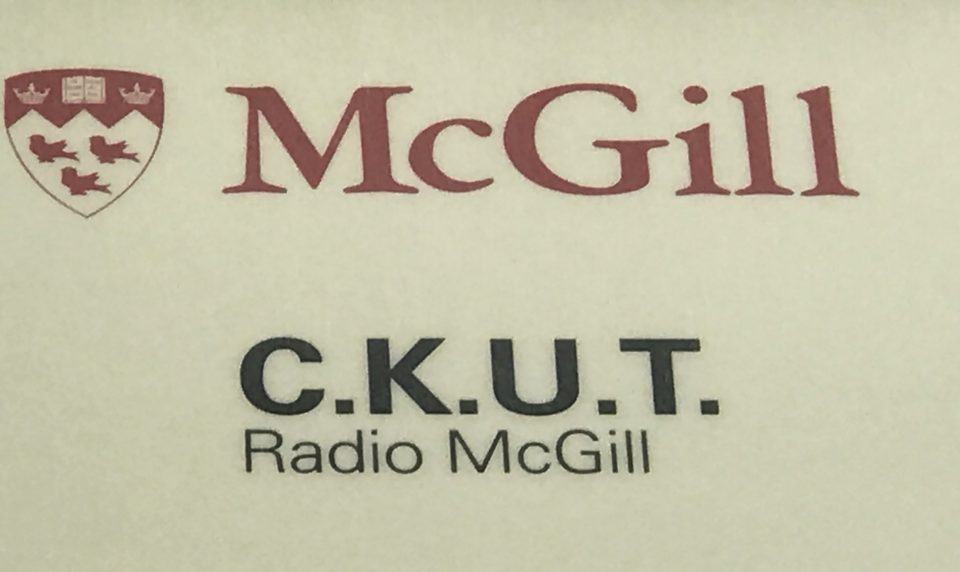 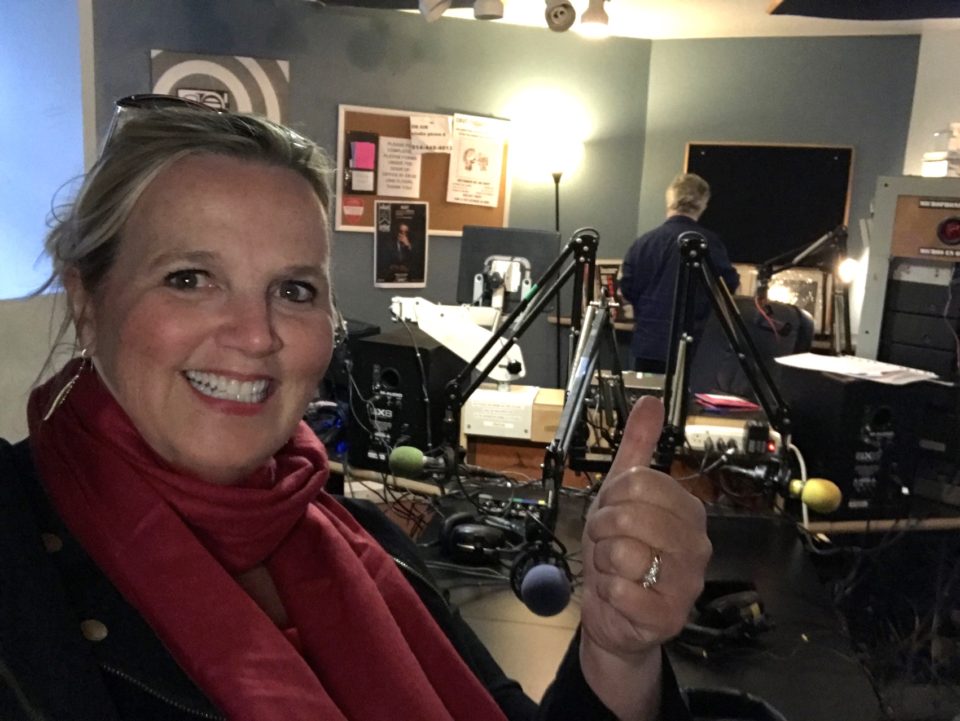 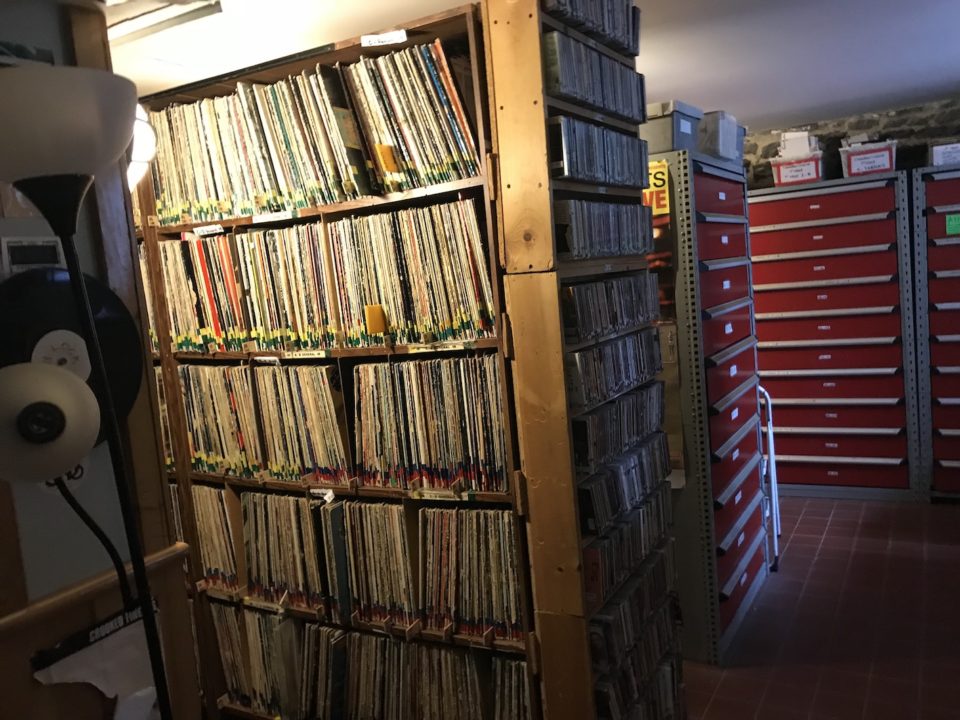 If you’re at McGill, or ever attended, there’s a good chance you’ve frequented the student ghetto right next to campus. After a first year living in residence, I spent the remainder of my university years here, in various pads in these parts, some more suspect than others.  One year I had cockroaches for pets. My kid has discovered one such palace (cockroach-free although rumour has it a local squirrel has a key), perfect for pyjama parties and other such proclivities.

One wonders if they play Twister. 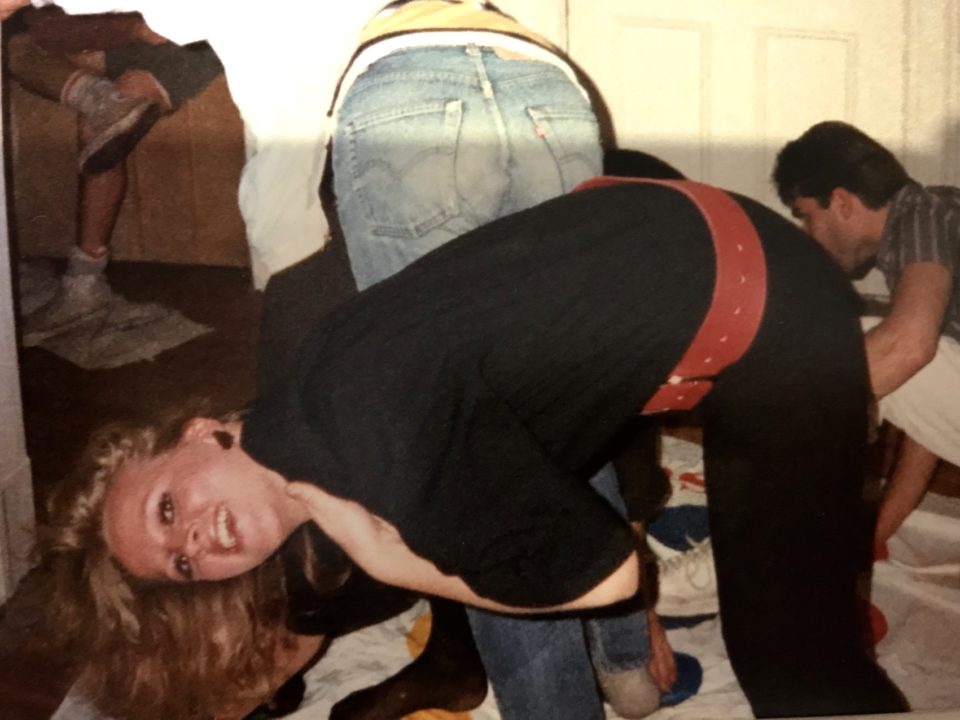 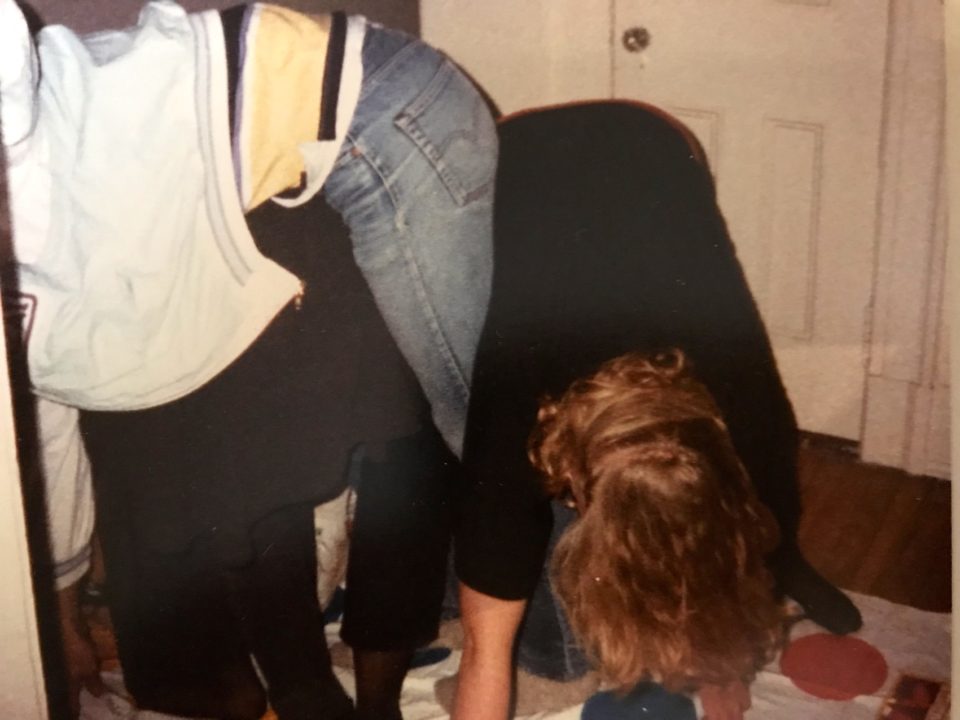 Imagine the hijinks when Mom and Dad are invited to visit a gathering millennials refer to as a pre (a noun and a verb. Handy!) Ignore the Dr. Seuss lean on the stairs; red for McGill, red for dangerous, red for come on up and you’ll have the time of your lives. 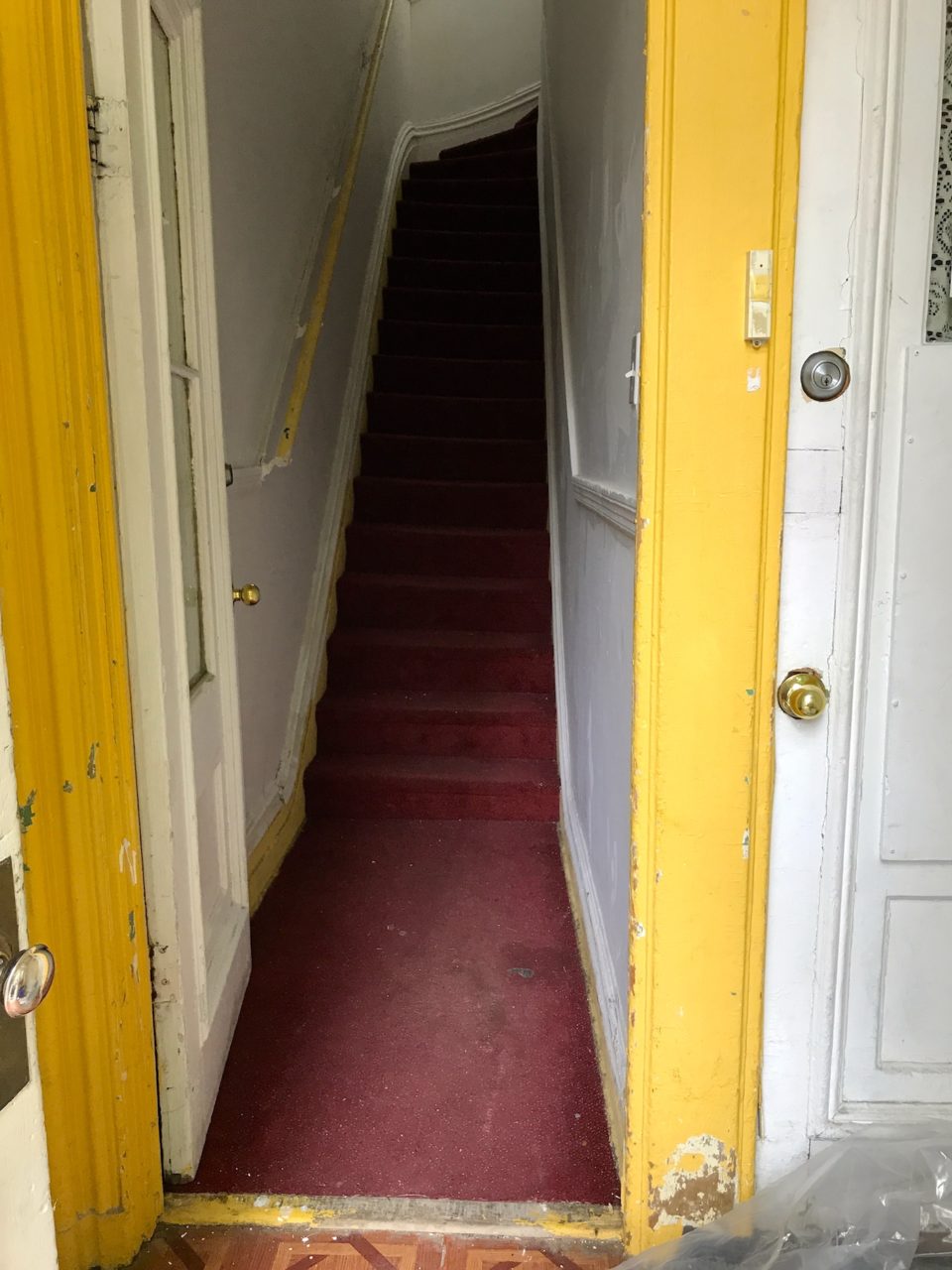 Once inside, Peter and I did our best to pretend for a few magic minutes that you can indeed go back. Being around gorgeous college kids is a trip. These kids inspire me. They may not beat me at Twister though, however grand their agendas. 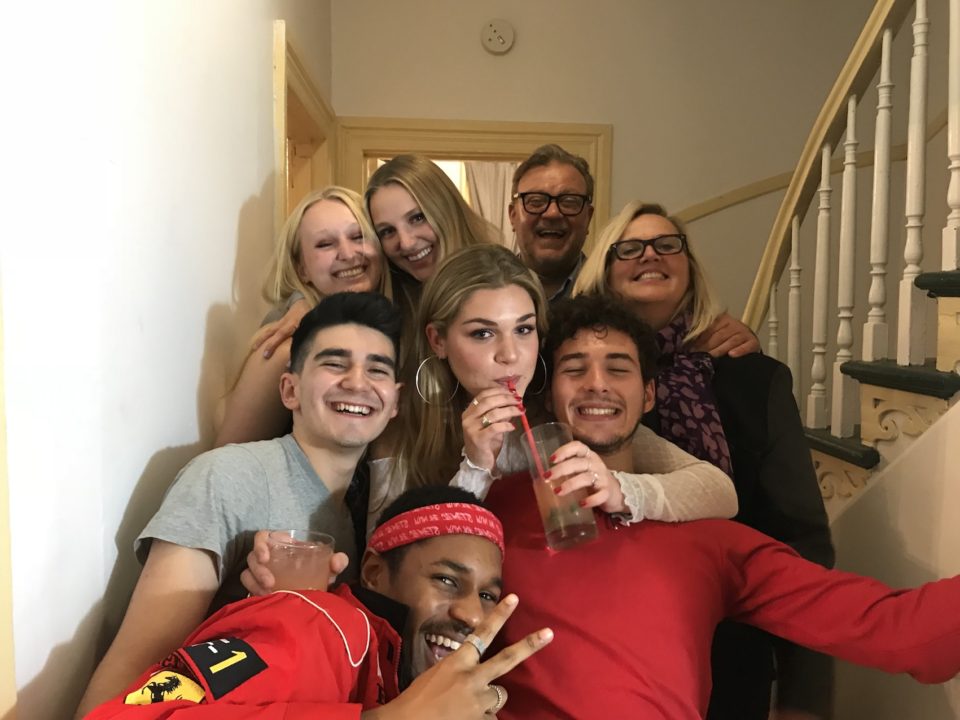 Thirty minutes in, and we know it’s time for our exit. Parents who linger are destined for the Ridiculous Corner, sharing burps with Belushi. 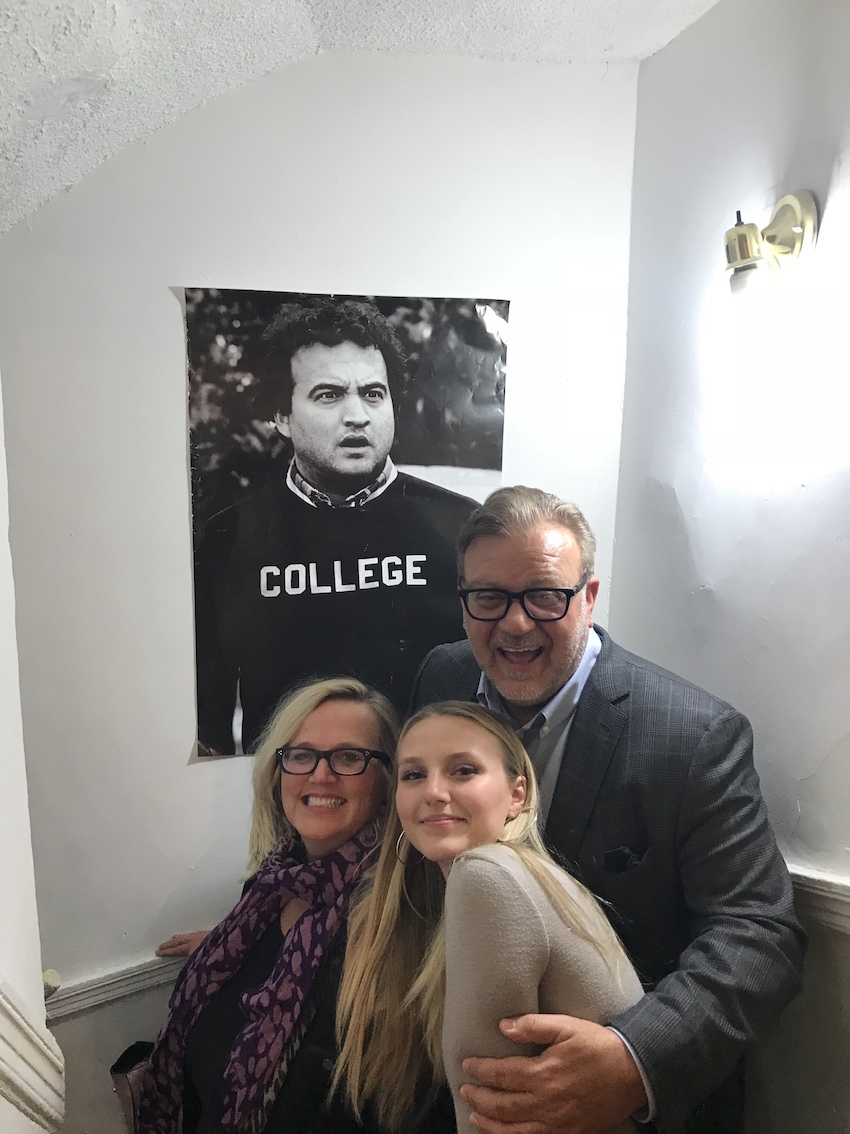 This is a tough school. McGill continues to rank in one international poll after another. 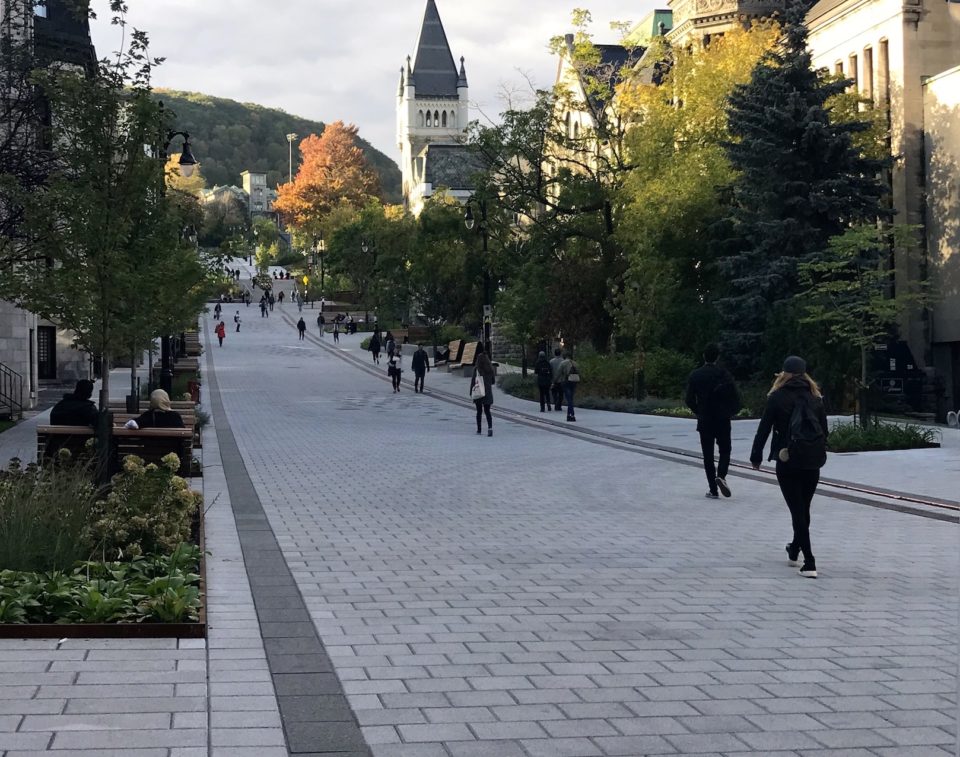 The school has also produced more Rhodes Scholars (142) and Nobel laureates (12) than any other university in Canada, reports Macleans. That’s one of those facts perky tour guides like to throw around, but what it really means is library hours here are as long as line-ups at Beautys diner; hangover headquarters then and now. (tip: purple smoothies and coffee. Wait to buy the bagel at Fairmount. You’ll need to take a dozen home for the roommates). 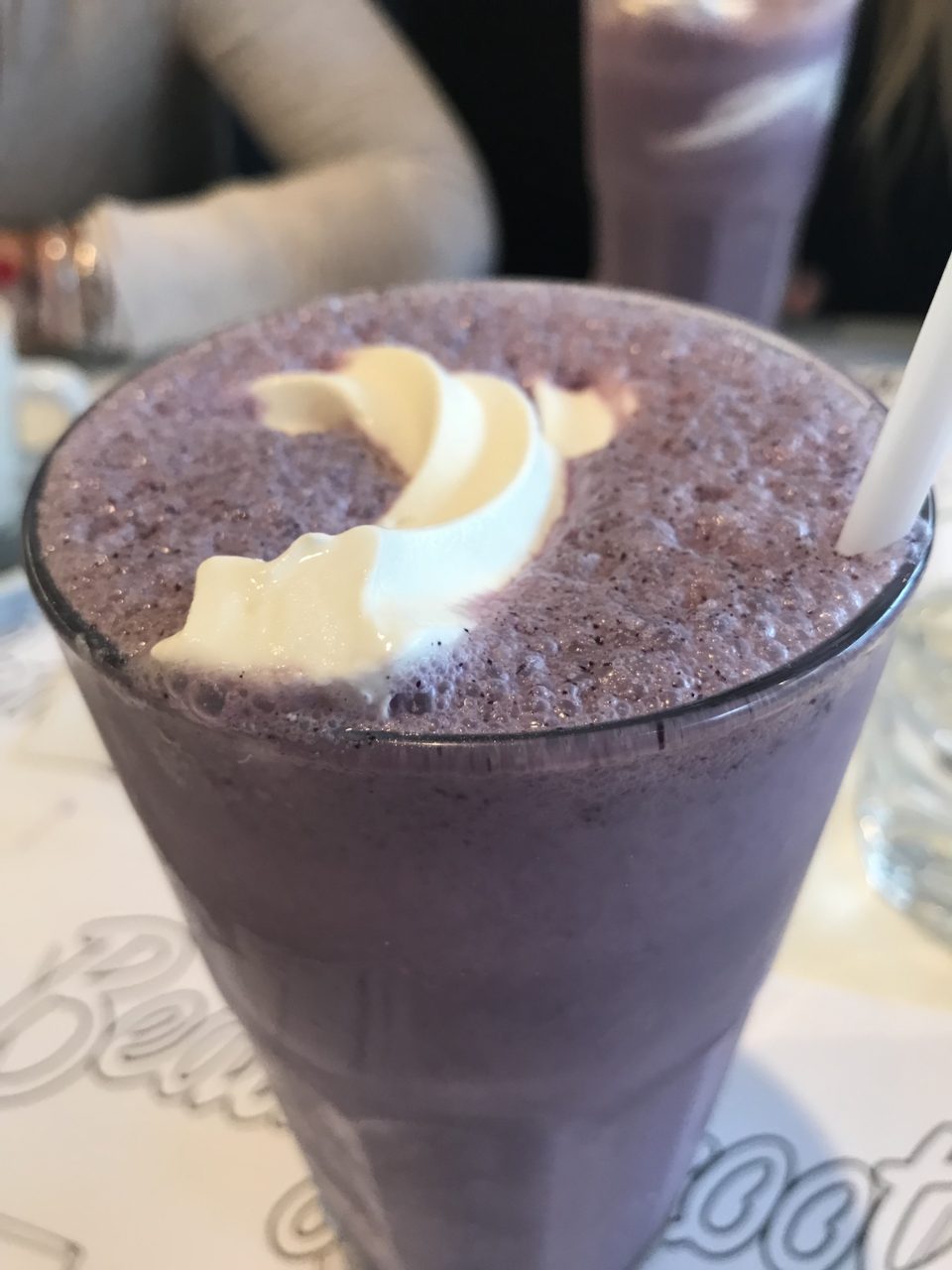 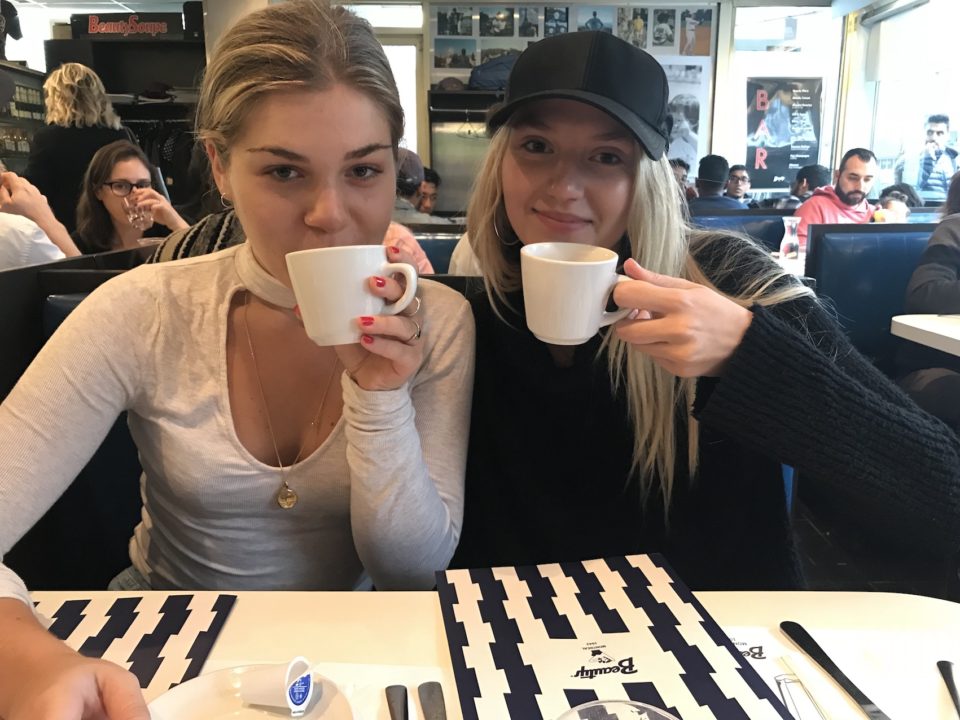 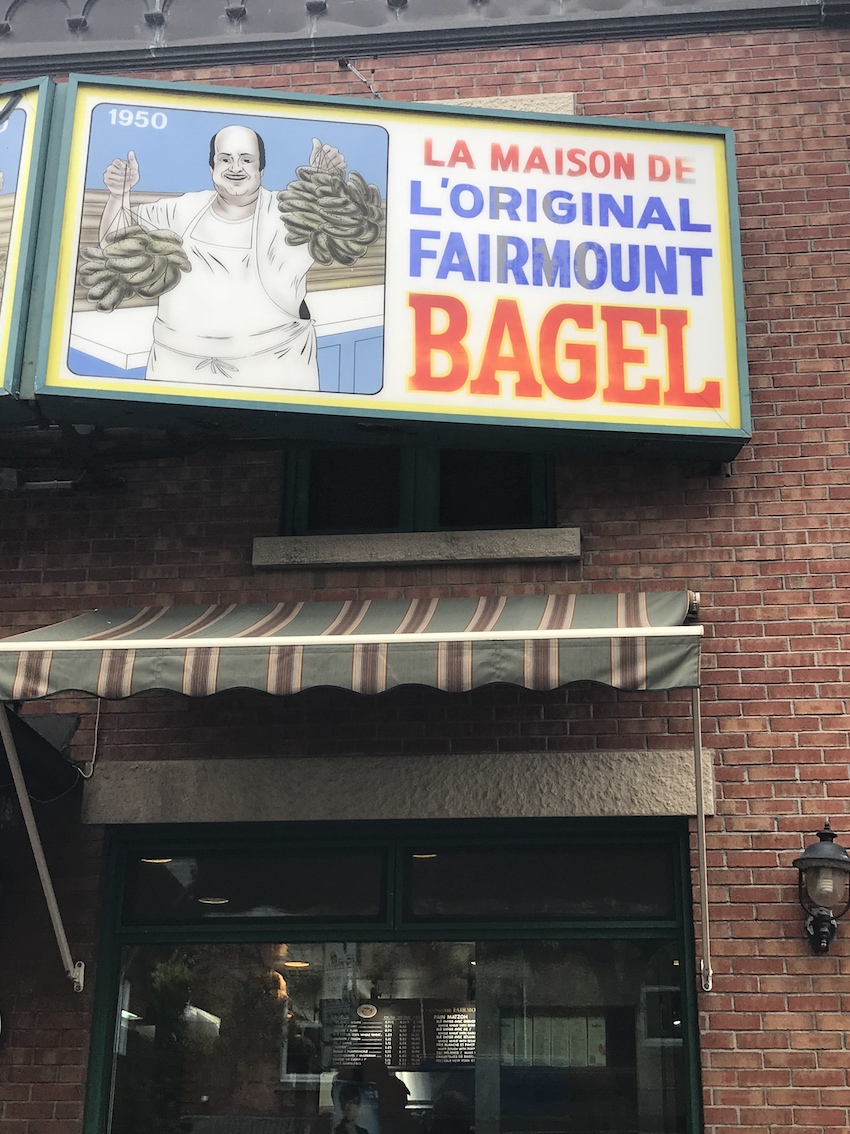 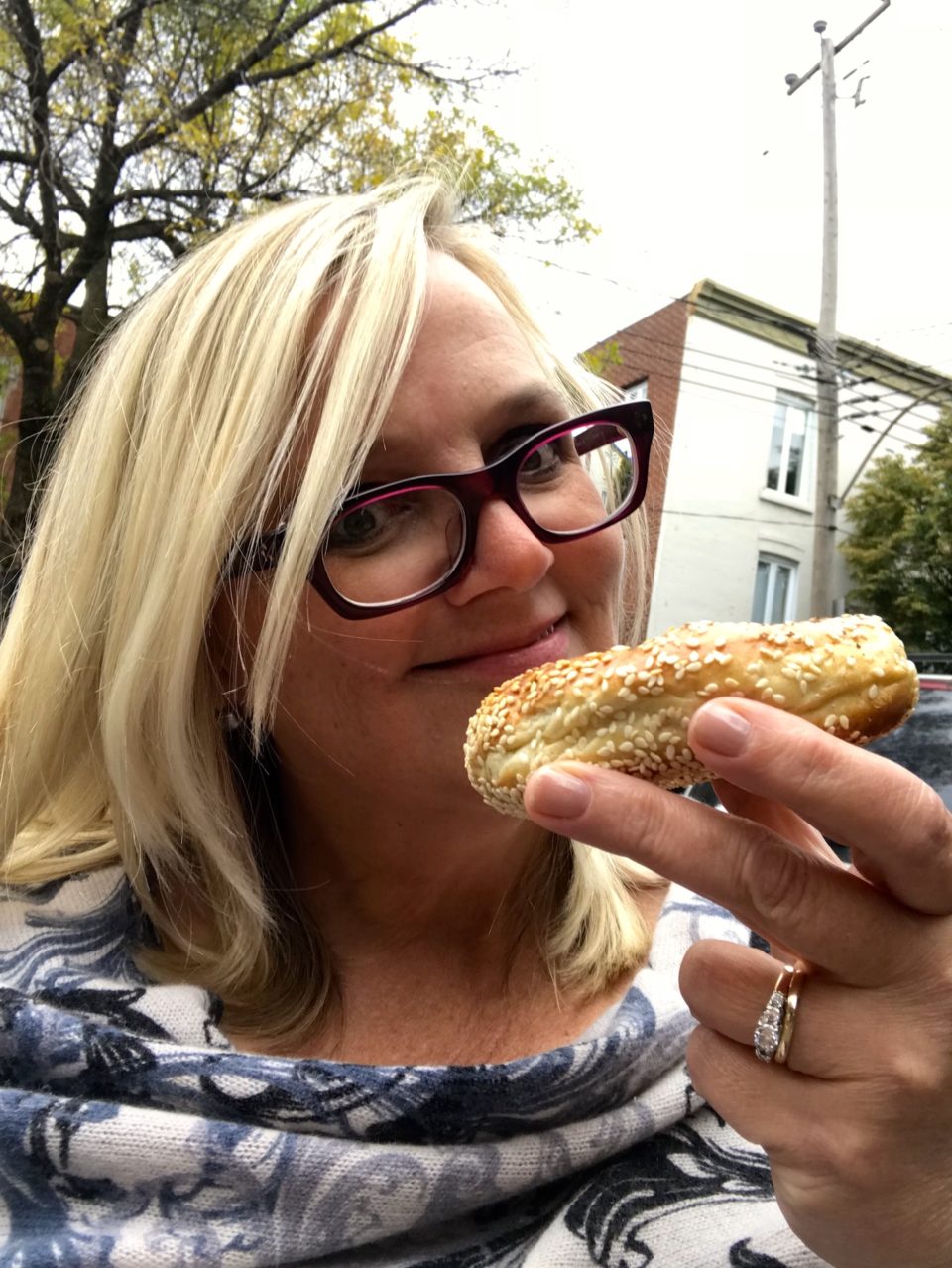 Montreal is chock-a-block with dazzling eateries and historic diners; festivals for hipsters and everyone else too. There is great pride here, and a pace set permanently to We-Know-the-Secret- to-Life in these parts. Don’t bother booking a restaurant dinner time before 9pm. You might be the only one in the place. This town has shifted the clock and students are the biggest beneficiaries.

Any trip to Montreal should include a trek up Mont Royal. No building structure is permitted taller than this gorgeous backdrop; a regular for Peter and I—we shared one year together at McGill (his last, my first)—and we took Lucy along to some of our secret spots. Dogs keep secrets, don’t they? * 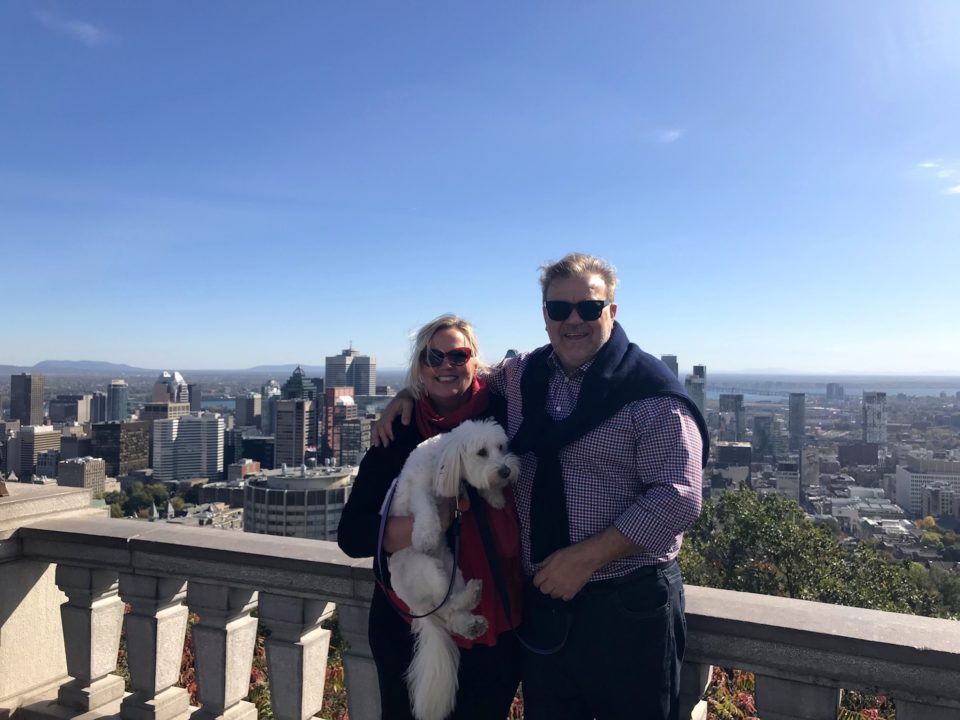 Montreal has always been a rainbow. 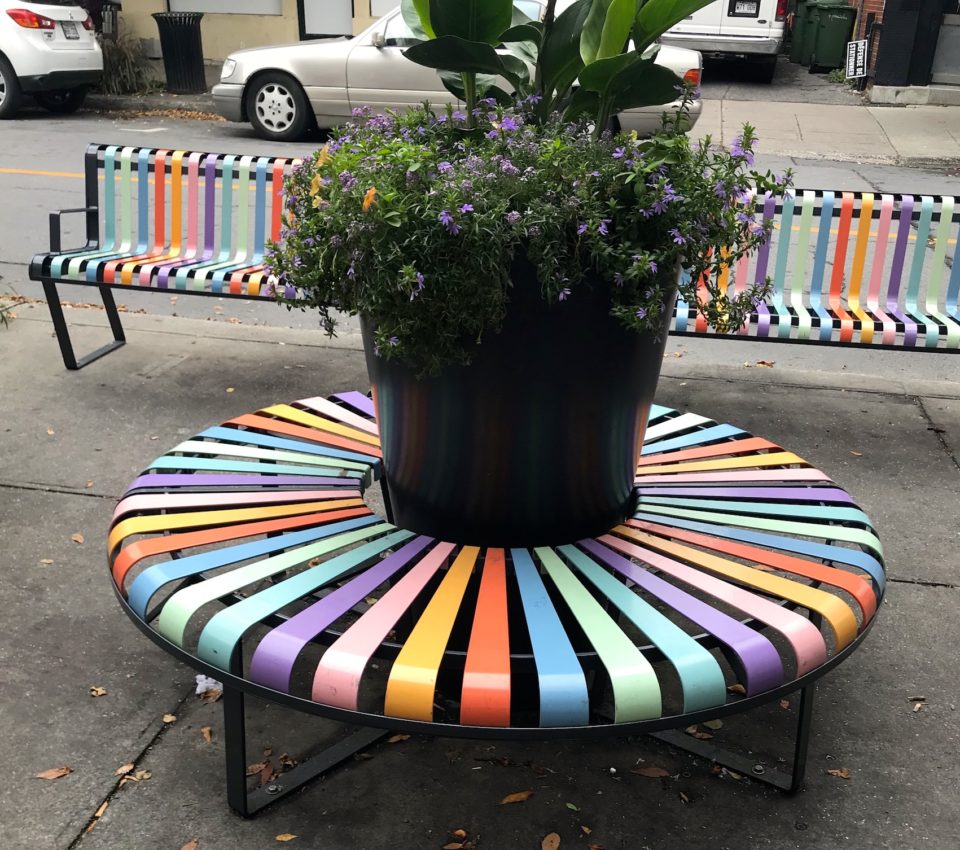 Until the end of this month, Sherbooke street is especially vibrant, thanks to this installation, created by the Museum of Fine Arts to mark the city’s 375th anniversary, the 50th anniversary of Expo 67, and of course, Canada’s 150. Peter couldn’t resist showing off his flag IQ every time we crossed Sherbrooke. Once a trivia master, always a trivia master. 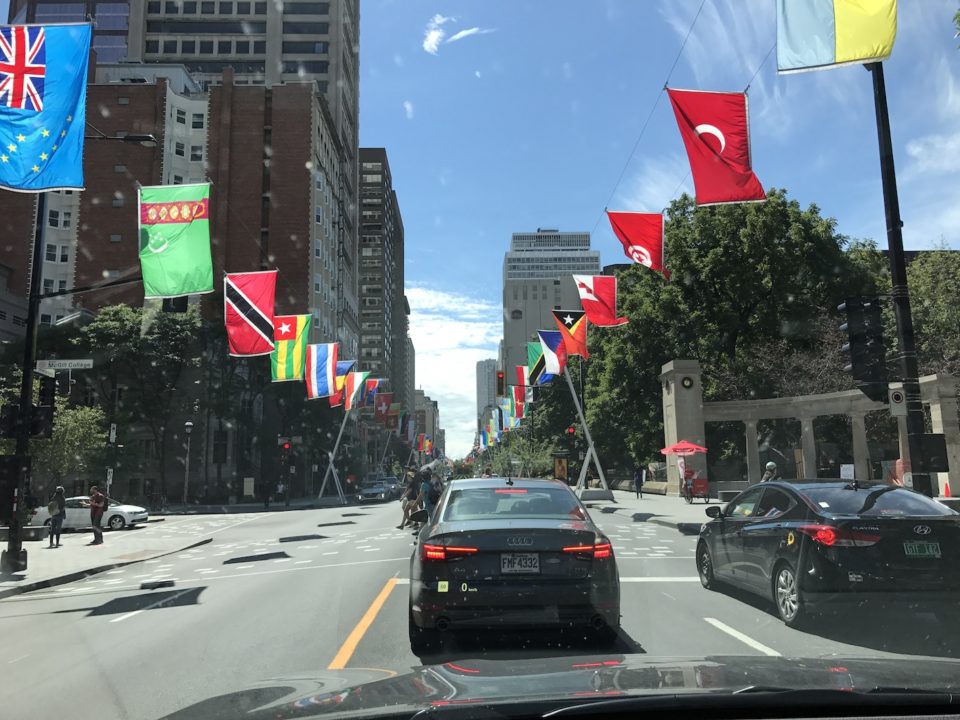 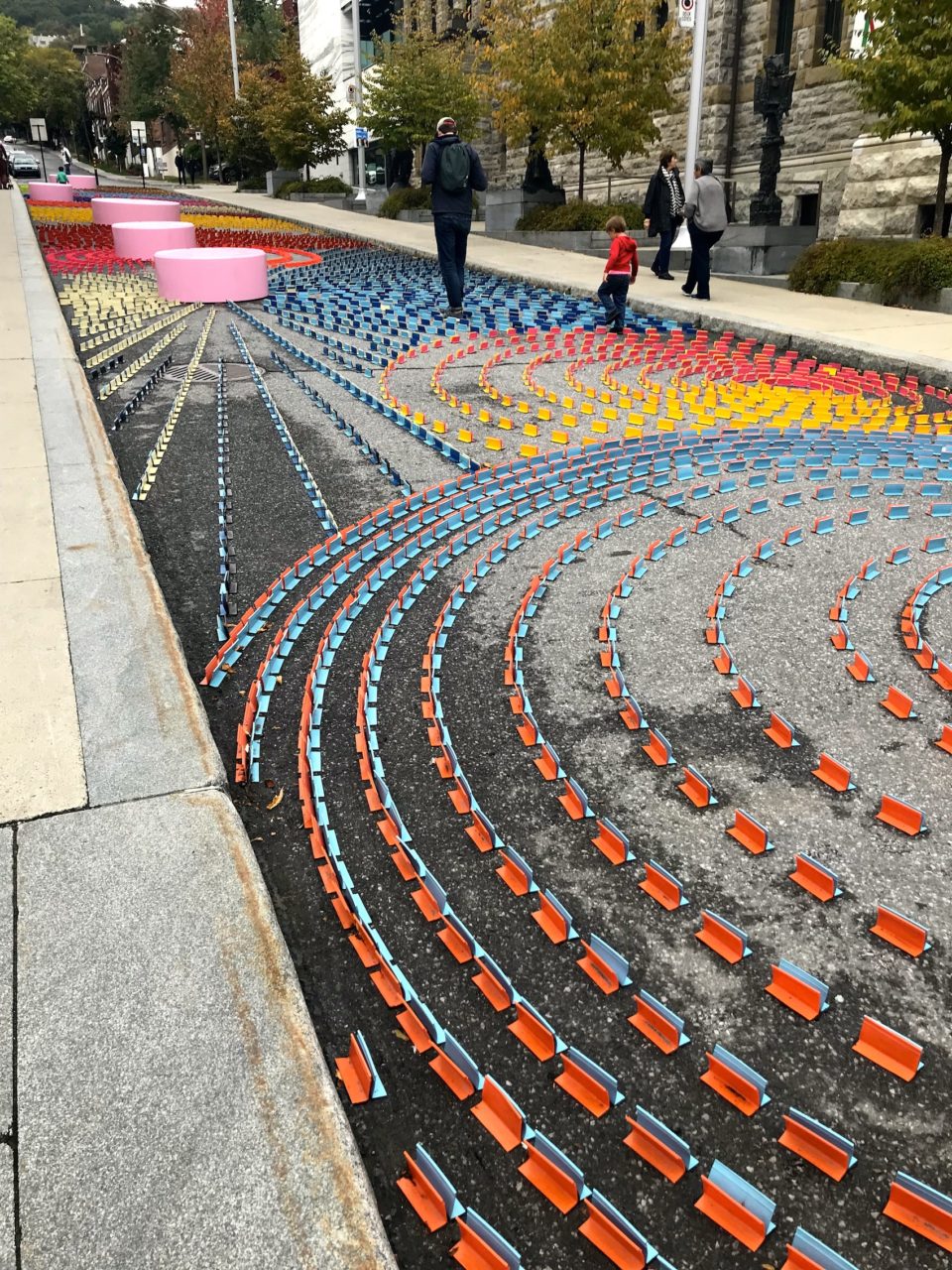 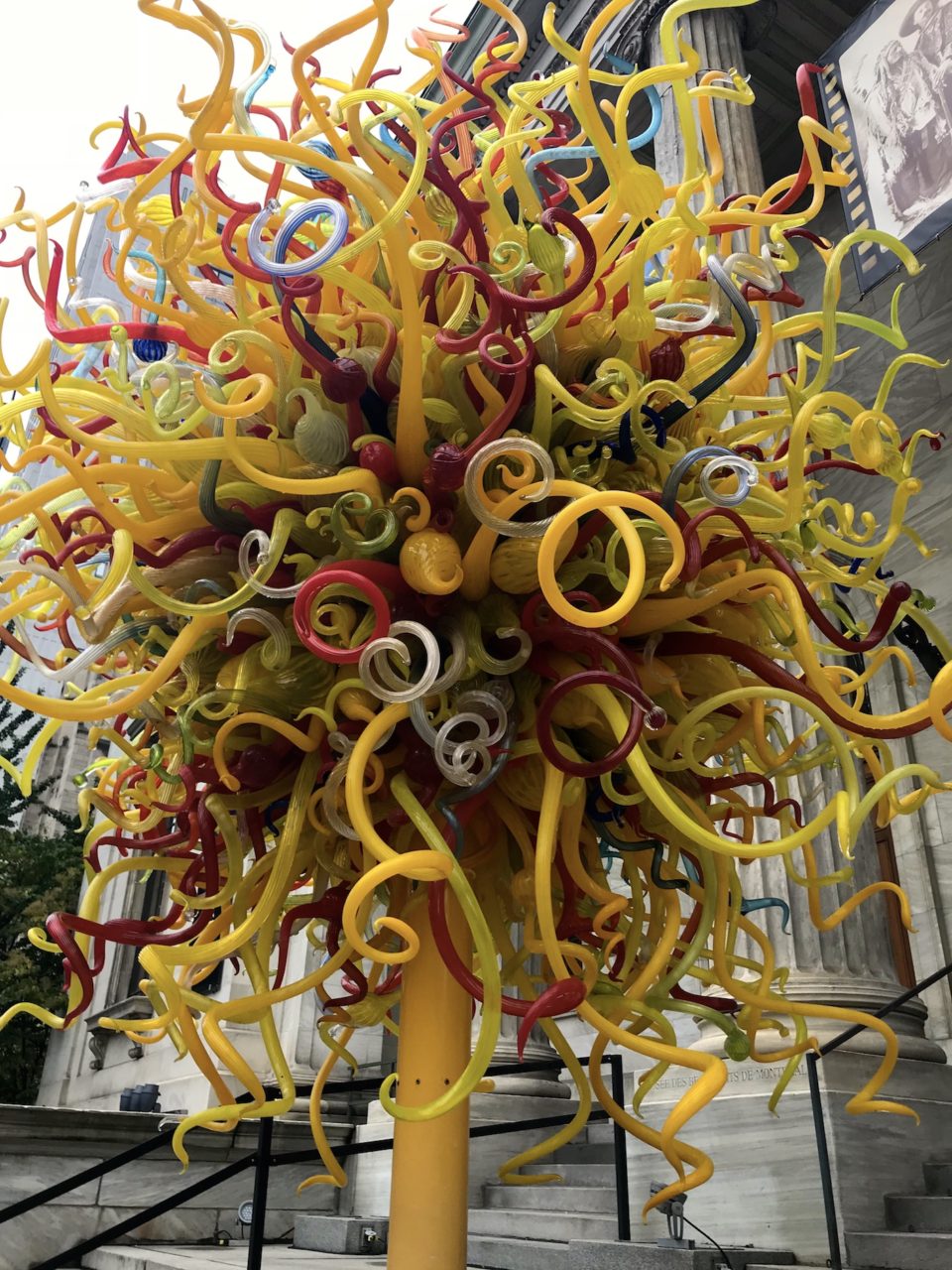 Also new is the La Grand Roue down in the Old Ports. 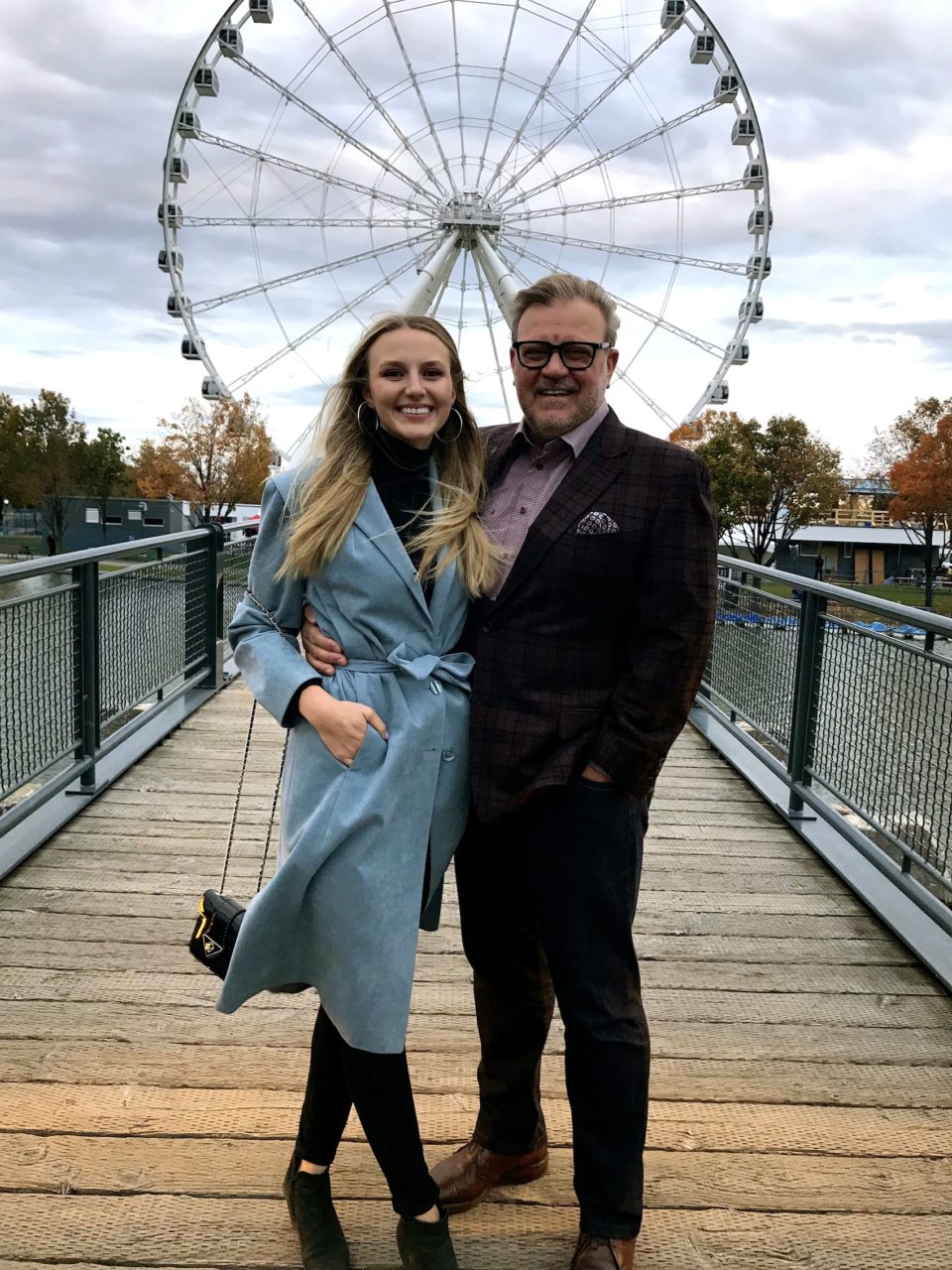 Best to go at twilight, and then meander around this historic district. Romance is the currency here. No history required. 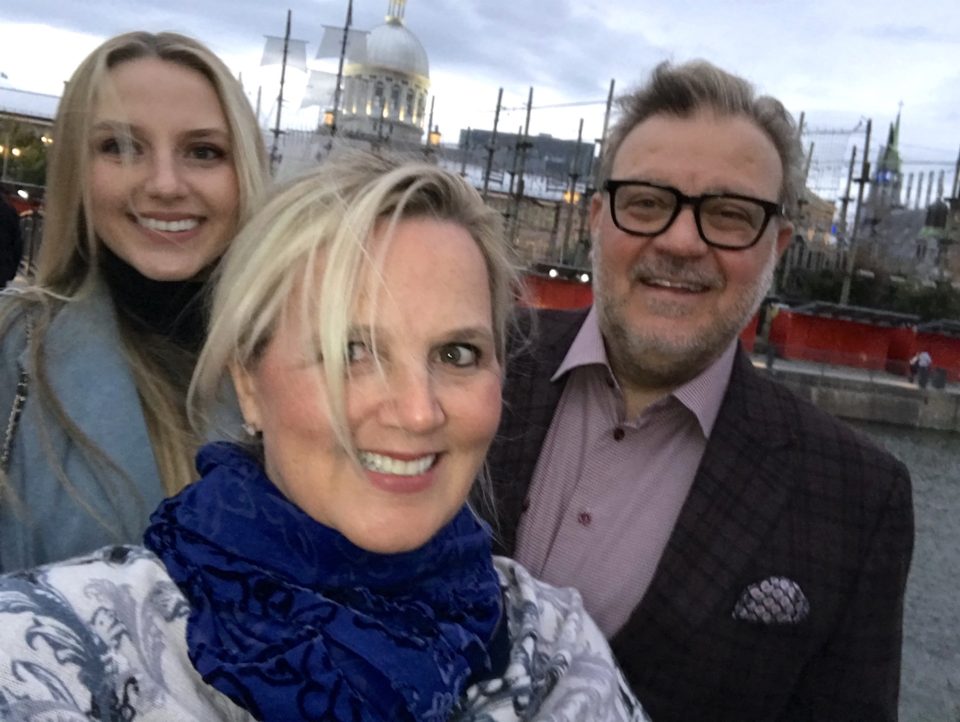 Even without a McGill chapter, Montreal will seduce you. My love for my hometown Toronto turf is deep, if a little worn of late—traffic has zero romance—and I have family in TO that rooted me then and now. Still, as you’ve likely guessed, I left a little piece in Montreal. It tugs at every visit. 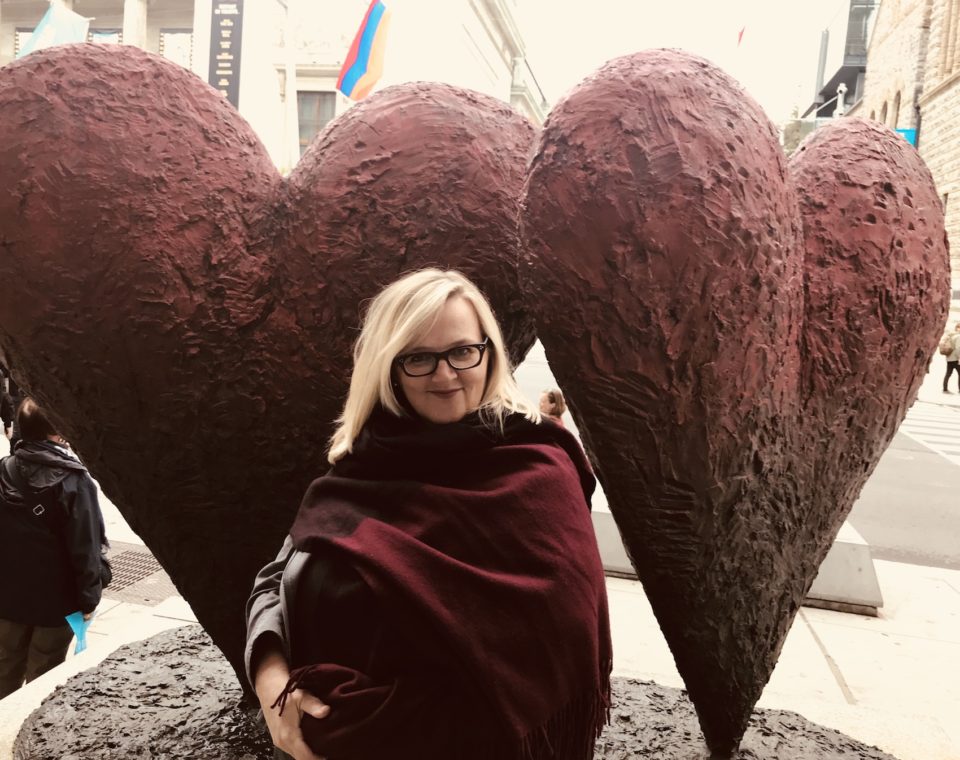 Good thing I plan some more visits. It’s handy to have a kid there as an excuse. She too knows a little about leaving her heart behind. 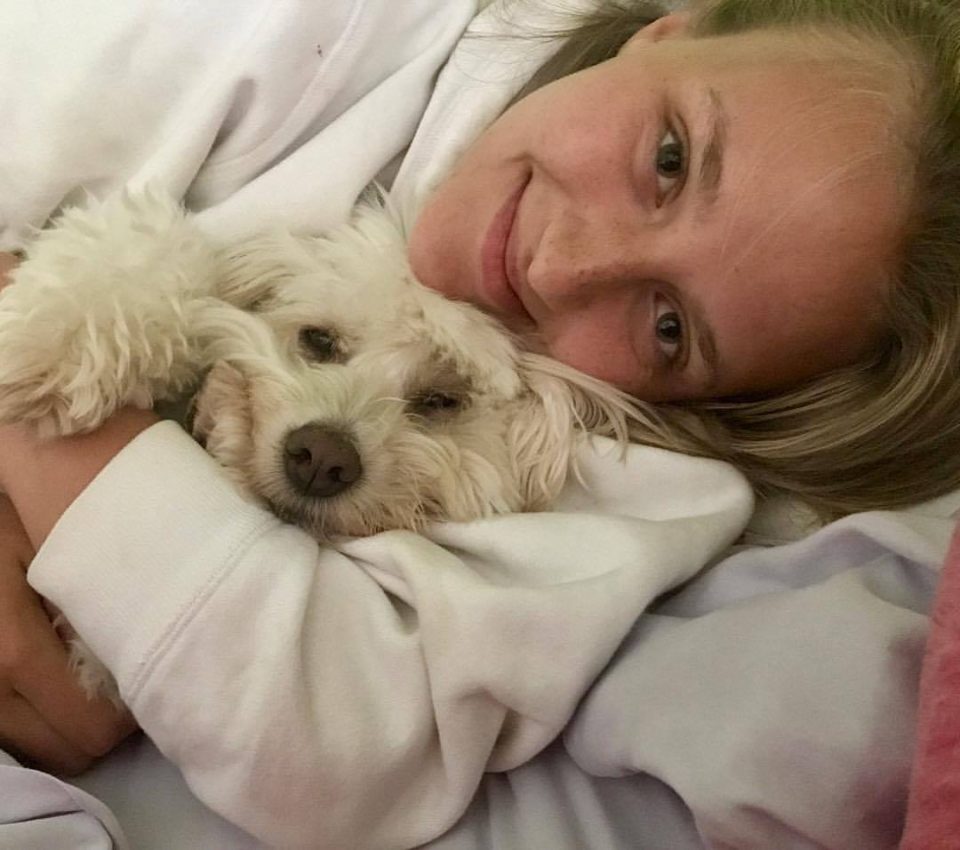 * Lucy spent most of her time slumming in the student ghetto. Special thanks to her new McGill pals who took care of her while Peter and I explored the city.  Like us, she’s likely angling for another visit but will have to rest up from the last one.