If you don’t do anything else, have fun! 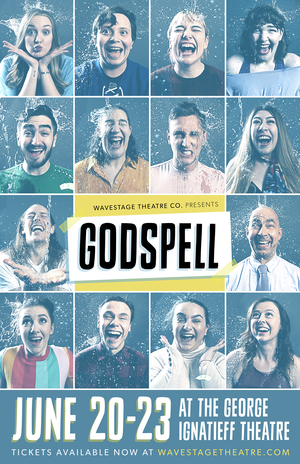 Messy times we’re in, messy and uncertain, and I’m not talking about the raccoons who have figured out how to open my green bin, flipping me the claw mid-dive. Turns out, Game of Thrones is not over. War is on, baby. Messy political elections to come. Messy climate doubletalk. Messy privacy losses-does anyone know what is going on, really? Me, I find answers in art. Hardly new, say you, readers of this space. Some of us— a lot of us apparently if you were part of the celebrations across the country this past week— find answers in too. On Monday, we witnessed a seismic shift in swagger in Toronto.

In 1972, another seismic event touched down in Toronto in the form of monster talent; a cast performing the musical Godspell, a cast including Gilda Radner, Andrea Martin, Eugene Levy, Martin Short, Victor Garber, and Dave Thomas. All would become household names in the comedic world and beyond. Bringing them together as company manager at the time was Marlene Smith, who first broke into the theatre world as a way to get out of the house in the late 1960’s. Smith, who had four children under the age of six when she began work in show business doing group sales for the musical Hair, would go on to produce countless hit musicals in this city. Godspell, written by Stephen Schwartz, was clearly special and remained so not just for Smith but for millions around the globe since it first appeared off-Broadway in 1971.

So it wasn’t wild imagination that provoked an invitation from me to this theatre powerhouse; an invitation to come and meet another young Toronto Godspell cast (hoping for seismic action in the current theatrical scene) and share some of her memories of her rise to the top of the commercial theatre world in Toronto. It was nostalgia: I, like many ’70’s kids, performed Godspell at camp. It was the closest I got to hippy culture.

I met Marlene downtown where the Wavestage Theatre Company cast was running through final performances of the modern revival version of Godspell: they open June 20th at the George Ignatieff Theatre.

In that strange confluence of events that make up a city of millions, I was listening to these talented performers in a chorus of that beloved Godspell showpiece, Day by Day at exactly the hour someone was pulling out a gun across town.

What follows are some of the excerpts of my chat with Marlene Smith.

Anne: What was it like navigating all that talent?

It was like having fourteen more children! When you sit through a lot of auditions, you can always tell when there’s someone who has a little bit of extra sparkle. The energy was unbelievable.

Anne: As a woman in show business, did you have to ‘muscle” people differently?

I became everyone’s mother only because I had so many of my own, and I also had a niece and nephew living with me so basically I had six kids so it was mostly, do what you’re told or look out! But you can do it nicely!

Anne: Godspell has been called a transformative musical. To what do you attribute the longevity?

It’s fun!. If you don’t do anything else, have fun! Really sock it to you. You can’t do too much of it. It was a joyful piece and every review said that. It’s like Come from Away. You enjoy it.

Anne: What did Stephen Schwartz think of the Toronto show?

Are you kidding? He made a fortune. He loved it!

Anne: You’ve been around for decades producing musical theatre. What, in your opinion, is the future of this genre? it survive?

I think it’s tough. The tickets have become way too expensive. After we finished Godspell, I got Marty Short and Andrea Martin and others and did a show What’s a Nice Country You Doing in a State like This? The logo was a very pregnant lady in the in NYC. I myself went with them, the cast, handing out one dollar bills with cards to all the cab drivers around… I mean we really worked at selling tickets.

Anne: Is there a song you love most from Godspell?

My song from the spectacular Godspell soundtrack is All Good Gifts. Saying grace in whatever form you fashion? Nothing messy about that. Thank you, Marlene, for sharing.